Fay Goddard: “The Lord hasn’t let me down yet.” 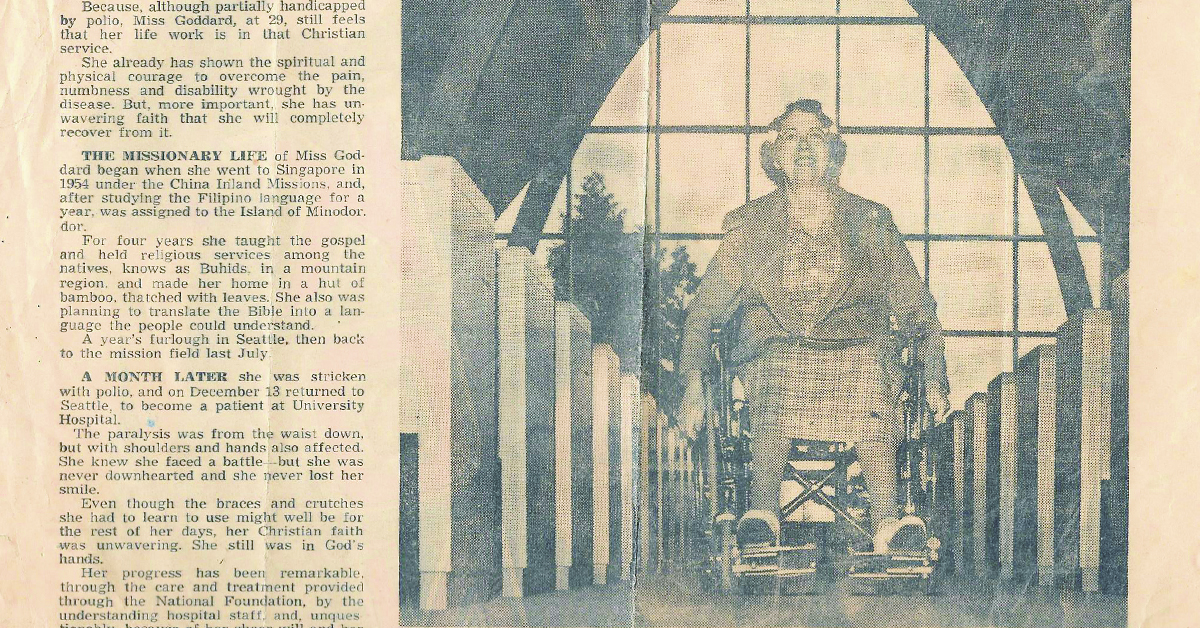 The Lord hasn’t let me down yet.

While we grieve the loss of Fay from among us, we rejoice that she is now experiencing the joy of a life well-lived for the Lord. All the Way My Savior Leads Me is such a perfect title not only for Fay’s autobiography, but also for her life.

Fay Goddard’s family attended a Presbyterian Church in Seattle. Unfortunately, Fay reported she never heard the good news of Jesus’ death on a cross or that through faith she could have new and eternal life.

The spiritual change in Fay’s life began at the Lake Sammamish Bible Camp. During her second year at Camp, just before turning 12, she gave her life to the Lord. Following that decision and as a new child of the Lord, Fay experienced joy as she had never known it before. She began her spiritual journey with Bible study, memorization of many Bible passages, singing, and association with joyful, dedicated Christians.

The following summer, Fay had two counselors at camp who were candidates of the China Inland Mission (CIM). God used them to direct Fay’s life towards missions and the CIM. Fay’s face was set towards China, but God had other plans. 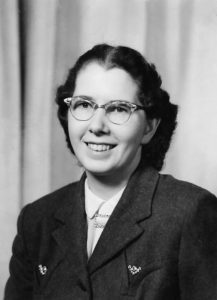 Following graduation from Prairie Bible Institute, Fay applied to Overseas Missionary Fellowship (OMF) in 1954 and within a few months attended Candidate School in Philadelphia. There she heard marvelous stories from the veteran missionaries, learned proper manners and protocol, attended prayer meetings, and learned about OMF core values and how finances were handled.

Finally, the candidates wrote out their testimonies for the OMF magazine, East Asia’s Millions. Even the vigorous volleyball games they participated in at Candidate School revealed the character traits of each of the attendees. They were being watched and evaluated.

With a bit of fear and trembling, the candidates wondered just what really difficult theological questions they would be asked by Dr. Clarence Mason of Philadelphia Bible Institute as part of their acceptance into OMF. Fay reported her relief and a bit of confusion when she was asked by this gentleman, “What would you do if you were stationed on an island somewhere in the Pacific and the mission ceased to exist?”

Fay reported she couldn’t think of anything smart or particularly spiritually impressive to say, so she just replied, “Well, the Lord hasn’t let me down yet.” Before the end of the day, she was a member of OMF and on the list to attend the orientation course in Singapore that October. She departed via ship just four months after her 23rd birthday.

A Change of Heart

In her own mind, Fay had decided that it would be logical for OMF to designate her for Malaysia since the Chinese made up a large portion of Malaysia’s population. After all, her heart had been set on serving the Chinese since she was a teenager and she had studied spoken and written Chinese, and Chinese history in college. However, the night before she would receive her designation by OMF leaders, she felt impressed on her heart that God wanted her in the Philippines! The next day, the leadership asked her if she would like to go to the Philippines. She could excitedly proclaim, “Oh, yes!” Fay thought, “What a wonderful God! He showed the OMF leaders the same thing He showed me!”

Fay was at peace with her assignment to go to the Philippines to join one of the teams taking the Gospel to primitive tribes in the Mindoro Islands Mountains. Somewhere lost in Fay’s files was her previously determined designation to serve with co-workers pioneering a literature ministry in the Philippines. However, as always, God knew what He was doing and allowed Fay the joy of a full-term reaching out to a tribe, prior to calling her back to literature work.

In 1956, Fay joined Bob and Joy Hanselman and veteran missionary, Marie Barham, in ministry to the Buhid tribal people. Bob and Joy reached out to the southern half of the tribe, while Marie and Fay worked two to three hours walk to the north.

“We can trust you to lead us down this new trail.”

Following her co-worker’s death of cancer and at just 26 years old, Fay was now alone in ministry to the Buhid. At that time, these tribal people did not allow outsiders to live within their village. This left Fay living in a very isolated area outside of their community. With a need for safety and a desire to be a part of the community, Fay began praying that she would be able to break through the wall of tradition and fear.

Eventually, Fay was given permission to stay four days within the village. During that time, many tribal people came in to spend time with this outsider and Fay was able to help them understand a bit more about the Lord. Apparently Fay passed the test during this short stay and they allowed her to move permanently into a house in their village. The villagers were afraid to live in that particular house since someone had died in it. Fay was able to show them the evil spirits they believed lived there had no power against the Risen Savior. She began worship services in this home, and also served as a nurse of sorts in the community.

Returning from a vacation after living several months in the village, Fay was greeted with an amazing decision that had been made by the tribal leaders of the village with regards to the Christian path. A spokesman explained to her, “You know what’s in that Book. We don’t. For us, it’s like following you down a trail. Each turn in the trail is a surprise to us. We don’t know what’s coming next. We decided that since you had never betrayed us over these years, we can trust you to lead us down this new trail.” One by one God wrote the Buhid names in His Book of Life.

At Peace With God’s Will 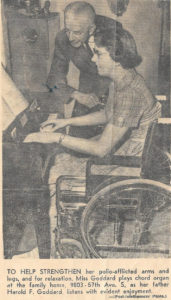 Following her first furlough, prior to returning to the Philippines, Fay was refused her last polio vaccine. She was told by US health providers that they were short on serum and she would just have to get it in the Philippines. That was a situation that changed the entire course of Fay’s life.

Upon her return to the Philippines, she knelt beside her cot and placed her life on God’s altar. “Whatever it takes to do Your will and to help build Your Church, I am willing for”, she told the Lord. As she entered the village, she was warmly welcomed by the people. They had built her a house while she was away and were delighted to present it to her.

Seven weeks into her second term, Fay got very ill. She was initially evacuated by an old van from her village to Calapan. In extreme pain, she was then sent on by commercial plane to Manila where she was diagnosed with polio, before being sent on to the US. In spite of the verdict, Fay was at peace that she was within God’s will. She also felt that her nine months at the University of Washington Hospital for treatment and rehab were probably the most fruitful months of her Christian walk.

Fay’s new life now began in Philadelphia, Pennsylvania in the OMF US Headquarters office. She felt like everyone was just creating little jobs to keep her busy and that was very discouraging to her. However, God had other plans – much bigger plans – for Fay’s life.

Prepared for a New Ministry

Once Fay settled in her heart with God that she would do whatever He gave her to do, she was asked to take over the production of OMF’s East Asia’s Millions magazine; a position she retained for 28 years. All of her background training in editing, print setting, art, and literature, as well as the personal hands-on knowledge of serving overseas among tribal people, came to the forefront in this new position. God, indeed, had prepared her for a new ministry. Fay was even known to comment that she was “thankful” God had allowed her to contract polio in order to allow her to use the skills and talent He had given her and serve where He wanted her to serve. What an attitude!  What an amazing woman of God! 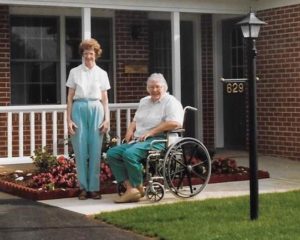 Fay, along with her roommate and OMF co-worker, Dorcas Simpson, hosted many guests over the years. Several of these guests were those attending OMF Candidate Course. Fay and Dorcas observed, counseled, and nurtured these special guests.

Several years after returning from the Philippines, OMF leaders were hoping Fay could fill in for a year in Singapore, while the international editor went on furlough. Unfortunately, the lack of handicapped accommodations in Asia was not adequate enough for Fay to live there. However, Fay did take over that role, but from her desk in Pennsylvania. She also did book-editing tasks which she accomplished as part of her role in the Communications Department of IHQ in Singapore.

Having had the blessing of living among and caring for the people of the Lammermuir community, I can attest to Fay’s ongoing amazing attitude that continued throughout her lifetime. She was an inspiration to all. Fay’s love for the Lord and her willingness to be molded in His hands was so evident.

The final paragraph in her autobiography sums up who Fay was. “…I do know that, up to now, ‘Jesus led me ALL the way.’ …I want the world to know that the Lord can be trusted with a life. Mine has been rich.”

And now Jesus has led Fay ALL the way into her heavenly home, but we know that her legacy will live on as inspiration to others.

Wonderful story! Fay was one of my long-term friends.

As I have never met Fay, just knew about her, I really appreciated reading her story. Thank you JoLene!