Why Devote Our Lives to Missions?

Why devote our lives to missions? In 1956, John Casto gave 10 reasons in response to this question on his missions application.

I was moved when I reviewed John’s application paper and read his responses to the question of why he was applying for service with China Inland Mission (CIM/OMF). These were his reasons:

From the Military to the Mission Field

After being discharged from military service in Hawaii, John had a growing conviction that God wanted him to be a missionary and he made a public announcement to this effect during his second year of college. 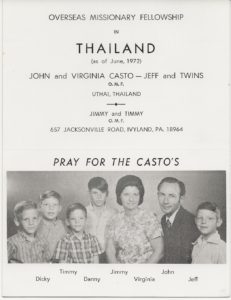 Circumstances forced him to stay out of school for a year, but during that time, the conviction only grew stronger in his heart that God had his hand on him for overseas mission service. With this in mind, John applied to the CIM in 1956.

“My heart and mind have been drawn back many times to the people I came to know and love in Hawaii, and then beyond them to the peoples of Southeast Asia. With confidence in the Faithful One, I now look forward to service in the Far East in the Fellowship of the China Inland Mission.”

Evangelism and Church Planting in Thailand

In May 1957, John traveled to Singapore and then on to Bangkok for language and orientation training. In December of 1957, John continued language study and served in hospital evangelism and follow-up at Manorom Christian Hospital. At the hospital, John met Virginia who he married in 1959.

For two years the Castos served at Tatago in evangelism pioneering; two more years were spent in Paknanpho in evangelism and church work, followed by a year in which they served in Bangkok where John served in the office. 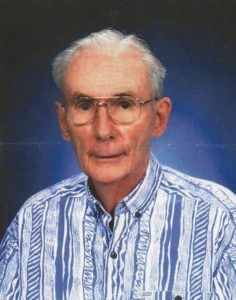 The many field director reports during their years of service in Thailand spoke of John being a faithful and effective worker; with God’s grace they were seeing steady growth among the Ban Rai churches. The Castos were good church planters who were appreciated by their team. John’s solid, faithful, loyal, reliable work and diligent service resulted in church planting success in Central Thailand.

While John suffered from health issues when he returned the US, his faithfulness to the Lord remained unswerving. His was a life well lived and he left behind an amazing legacy.

Thank you for encouraging us with this story of a couple who served faithfully for so many years.

Thank you for your comment @Ka-Neng Au. We agree that stories of faithfulness are so encouraging!