Responding to the Call

It was a special Sunday for Laurie Carson.

She teared up as her father’s black-and-white prayer card flashed up on the screen. Laurie stood before the congregation at her home church, Harmony Road Baptist Church in Oshawa, Ontario, to share her father’s legacy.

There couldn’t have been a more appropriate day for her to do so.

Laurie’s church joined more than 5,400 churches and agencies around the world in singing the hymn “Facing a Task Unfinished”* on February 21, 2016. The hymn powerfully captures the cry of today’s church as it longs to see church movements in 6,792 unreached people groups worldwide.

Carl Silfwerbrand embodied the hymn’s message with his life. In fact, it’s likely he responded to the call for which the song was written—the plea sent out by the China Inland Mission (CIM) in 1929 for 200 new workers for China. Missionary Frank Houghton wrote the hymn in hopes of mobilizing prayer for the bold request of finishing the task to reach the entire world with the Gospel. Carl Silfwerbrand, moved by China’s spiritual needs, left for China just a few years later. He would spend the rest of his life pouring himself out “for Christ and China.”

Today, Carl’s story continues to inspire and set an example of a life well-risked for Christ. God used this young man to advance the spread of the gospel during one of China’s most historically dangerous periods for missions laborers.

A Young Man Finds His Mission

Seventeen-year-old Carl Silfwerbrand, son of a noble Swedish family, walked with his cousin to the dance. They passed by a building and heard a preacher speaking passionately. The young men stopped to listen. Carl’s cousin insisted that they continue on, but Carl stayed, listening intently to the gospel message. It was unlike anything he had heard before. That night, Carl gave his life to Christ.

Little did Carl realize that his call to Christ would also mean a call to China during a period of intense persecution, and, later, during the occupation of Japanese forces in Mainland China during WWII.

Protestant missions work grew with unprecedented momentum in China in the early 1920s. However, anti-foreign sentiments boiled up and gave rise to Chinese political forces that vehemently opposed the presence of foreign missionaries.

The period of 1922-1927 saw the persecution, torture and death of many Western missionaries. Missions agencies started pulling out of China. The China Inland Mission suffered the loss of 12 workers and five associates. Despite this tragedy and the possibility of further loss, the CIM issued a call for 200 new workers for China in 1929.

Carl, who had gone to Bible school in Stockholm, Sweden, shortly after his conversion, was made aware of the needs in China. After Bible school he headed to England, where he set out to learn Chinese. Unfortunately, books on Chinese language learning were only available in English; he became determined to learn English as well.

In 1931, six years after coming to Christ, Carl set sail for China with the Swedish Holiness Mission, an associate mission of the CIM. It seemed that Carl was an answer to the CIM’s prayers.

Marriage and the Mission Field

Carl wouldn’t be responding to the invitation alone. Though he struck out for China as a single man, his heart was promised to a young woman named Martha Pilth, the daughter of peasants from central Sweden, whom he had met at a camp run by his Bible school. They headed to China separately but married there in April 1934.

Carl and Martha were initiated into the harsh reality of missionary life when their home in Guangling, China, was burned down by communists. Committed to God’s will, they did not leave China, but rather relocated to Datong. After all, the sacrifices of CIM workers had preceded them. In 1934, the year they married, news came of the execution of two CIM workers in China. John and Betty Stam had been martyred by Communist soldiers for their faith. 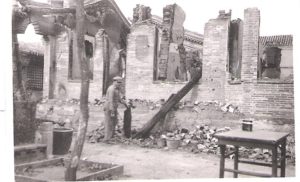 Remnants of home in Guangling after the fire.

The Silfwerbrands had not come to China for convenience or comfort, and it’s a good thing—their lives were anything but convenient or comfortable. Western missionaries would face opposition from different hands when Japanese forces invaded China three years later.

In 1941, when Japan went to war with the Allied countries, the Japanese sent many Western missionaries in China to internment camps. It was that year that Carl and Martha were asked by the CIM to run the guest home in Tianjin, China. Their family was not targeted like other foreigners because Sweden remained a neutral country in the war.

Carl and Martha’s American, English, French and Canadian colleagues were not so fortunate. They were sent to Weihsien Prison Camp in China’s Shandong Province. Hundreds of other Western missionaries would accompany them. Eric Liddell, the famous Olympic runner depicted in the movie Chariots of Fire, was among them. The staff and students of the CIM-established Chefoo School were also sent there when the Japanese turned the school into a military base.

Though the Silfwerbrand family did not join their colleagues in body, they were present in spirit. They did what they could to provide relief and encouragement to the prisoners. Leif, the second oldest child of the Swillferbrand family, recalls his family’s holiday tradition of smuggling Christmas packages into the internment camps.

“All the candy and food was put into plastic bags. Our smugglers would take these bags to the men that cleaned out the septic tanks at the camp. This was done by oxen pulling a cart with honey buckets. When the time came to clean out the cesspools the men would put the candy and food in the empty honey buckets and bring them into the yard where these buckets were then filled with sewage. Because of the smell the soldiers stayed a good distance from the sewage pools.”

Information was also sent by creative means. “Another method of getting information to the prisoners,” Leif says, “was to write info on a piece of paper and roll it into tiny rolls and the men would place these rolls up into their nose and when they were in the compound they would sneeze them out.”

Though Carl’s family avoided imprisonment, they were not exempt from house searches conducted by some of the Japanese soldiers occupying the region. Carl’s son Leif again recalls this wartime ritual from his childhood:

“During the nights the Japanese soldiers would raid our house looking for American spies. We were made to stand in our pajamas in front of our bedrooms as our rooms were searched. Then the higher ranked soldiers would sit down and interrogate my dad in front of us. At this time my mother was able to go and prepare coffee and serve Swedish coffee bread for the soldiers. This happened quite frequently. I think the generals got a liking for the Swedish bread and therefore returned quite often.” 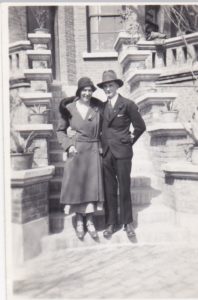 Carl and Martha’s engagement picture in front of the CIM home in Tianjin (Tientsin), China, circa 1933. 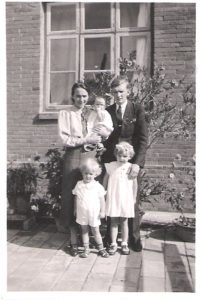 The soldiers never hurt their family, Leif remembers. Instead, they supplied his mother with the means to get flour, sugar, coffee, powdered milk and other daily food staples. Still, the family acted with discretion. It was not hard to remember the threat they were under, as sirens announced the arrival of B-29 and B-24 airplanes soaring overhead, forcing the children to take shelter against a wall or building on their way to school. “We were fortunate that they only bombed the factories outside our city,” Leif says.

Carl and Martha’s life in China saw sacrifice–and also heartache. They suffered the loss of a daughter, Ingalil, while there. They did eventually return to Sweden after serving at the mission home in Tianjin from 1941-1946. But their hearts remained in China. Carl served with the Swedish Holiness Mission from 1946-1950, traveling and advocating for the needs in China.

The Silfwerbrands left China just as the nation became increasingly hostile to foreigners. World War 2 ended when the Japanese surrendered in 1945, but the Communist Party in China fought and won ruling power in 1949. A couple years later, foreigners were decisively expelled from the communist nation. The CIM General Director resigned to the impossibility of further work in China, and thus he ordered all missionaries to leave. 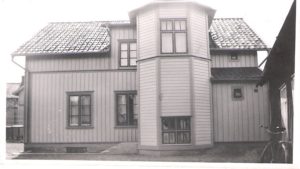 The home in which the Silfwerbrands lived on their return to Sweden, 1946.

Some missions agencies burdened with the great needs of China’s unreached now turned their attention to the great spiritual needs of other nations. Unable to continue work in China, in 1950 the Swedish mission asked Carl to survey potential locations where missionaries formerly meant for China could continue the work of evangelism. He found Japan to have open doors. It would become the new home and mission field of Carl’s now seven-member family. They left for Japan in November 1950.

Three years after relocating his family to Japan, Carl suffered another difficult family loss, this time of his wife, Martha, in 1953. Unbeknownst to Carl, God was preparing another partner for him through Marion Loveless. The single missionary from Ontario, Canada, taught Carl’s children at their missionary school. They would date and then marry in May of 1955.

Carl’s family continued to grow as they had three girls together, the youngest of whom was Laurie Carson. She happily testifies to the very real presence of Jesus in her father’s life. He passed away at the age of 73 in 1981.

Laurie shares:
“My dad had more of a servant’s heart than anyone I have ever known, and I only pray I can live up to the standard of love he lived. He was such a hard-working, unselfish man, it makes me sad that my children never got to know him. My mother’s heart prays that they will one day meet in heaven before our Savior as he regales them with stories of God’s provision throughout his entire life!” 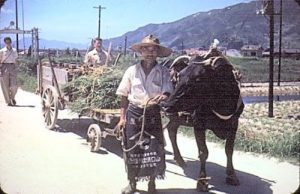 The Task Before Us

God is prepared to equip his church for mission. The task may seem daunting: taking the gospel to 6,792 people groups who haven’t yet heard God’s message of hope. But we go in the strength of our faithful God. As we see from Carl’s life, we need only be willing to face and embrace the task unfinished.