Missionary kids (third-culture kids or TCKs) are a unique and valuable part of our OMF fellowship. Even though their parents are the designated “missionaries,” TCKs play an equally important role in our OMF community.
Last month, we got the chance to connect with some adult TCKs while they volunteered at our U.S. headquarters. They came to our office in Littleton, CO, to help with a children’s program for Home Assignment Reunion and Training (HART)—a biannual conference where our missionaries gather for refreshment, fellowship and updates from the U.S. staff.
Having the adult TCKs as helpers for the children’s program was a special treat, as they could relate in a unique way to the experiences of our missionary kids.
“We’ve been through HART two to three times as the kids,” said Matthew, one of the adult TCK helpers. “Part of the reason I’m here is to be able to care for kids the way that we were cared for.”
We couldn’t pass up the opportunity to talk with three adult TCK brothers about how life on the mission field has shaped them. Read and watch the interview below to hear more reflections on the TCK experience from John, Matthew and Ryan*, who spent 14 years in East Asia.
*Names have been changed. 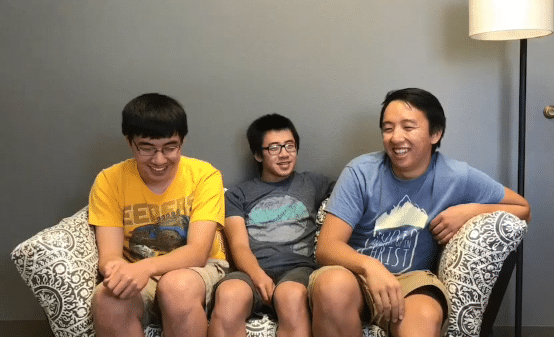 What do you want people to know about your experience in East Asia?
John: Now as adult TCKs, we’re definitely a little bit weird . There are a lot of places where we don’t quite fit the niche of either side. And that’s the idea of being a TCK—being stuck somewhere in the middle. And sometimes it’s like, oh, this is sad, there’s nobody like me. But at the same time, you bridge this gap. When you’re talking to TCKs about their experiences, be open to learning about both sides of them and letting them help you reach or understand another people group.
Ryan: When I think about my experience and coming back to the States, I think about molds. We hang out with a lot of Asian Americans and they have a picture of, “This is what an Asian looks like and this is what they like to do and these are the languages they speak and these are the foods they eat.” But there’s no single mold for TCKs or Asians in general and so going off what John was saying, each person has a different picture and a different shape that they fit.
If you were to return to East Asia right now, what is the first thing you would do?
John: I’d want to go back to some of the old places I’ve been to and see how much smaller they seem now, and also just explore them more and be able to appreciate them more as somebody who’s older.
Matthew: The thing about the country we were in is that it’s constantly changing. It’s actually changing at a very rapid rate so it would be cool to go and see “how is this different than it used to be?” or, “oh wow, look, that wasn’t there before!”
Where do you feel most comfortable—in East Asia or the United States?
Ryan: It’s really dependent on situation. It isn’t necessarily a physical location or continent. I personally find a lot of comfort in places where I feel I belong or have confidence. So with family or in doing tasks where I know I can contribute and be an asset to what’s happening.
Matthew: For me, probably the States at this point. We’ve been back for seven years now, and for our TCK experience we went to an international school, so we didn’t speak the local language as well as some other kids. So actually English is our primary language. It’s just easier to operate here.
John: I’m probably leaning toward overseas. I haven’t spent as much time in the U.S. as my brothers. Sometimes I sit back and think about all the stuff that happened in a day, and I think, “What just happened? The U.S. is really weird and so is everybody in it.” No offense. Sometimes it’s nice to go back to where I grew up and where things were simpler.
What’s the best thing to eat in East Asia?
Ryan: I really enjoyed one of the hot pot places we would go to. Everyone gets their own pot so you just cook what you want to eat.
Where’s a great vacation spot?
John: Thailand! It’s able to have a very exotic feel to it. You can ride elephants, you can pet tigers …
Matthew: You just have to get over the humidity … or go in the winter.
What question do you wish people asked you more?
Matthew: Missionary kids do a lot of traveling with their parents when they’re back State-side. And they visit a lot of churches. A lot of that is about the parents’ ministry so they get asked questions about that. I think it’s important to ask us about our story, because sometimes it’s too much about our parents. It’s sometimes good for us to be able to tell our experiences, to tell our stories, because we do have a lot of stories, but just we don’t get to say them terribly often.
Ryan: Sometimes there is a difficulty in sharing about our experiences, so there needs to be a sensitivity about which TCK you’re talking to. I think sometimes it can be better to be a friend and get to know them before going into some of the deeper stuff, depending on their personality.
Related Posts: Serving Third-Culture Kids at Home School Week / To the Ends of the Earth