Trust in the Lord With All Your Heart

As much comfort as Proverbs 3:5-6 bring, they perplex me at the same time. I get the bits about trusting the Lord and have leaned on those promises for many decisions. But how do we get from there to a promise about straight paths? It never quite made sense to me.

And then I met Timothy.

Timothy’s life has been full of curves and twists, yet when he looks back he can see that they all led him straight to God’s calling on his life.

Interview with Timothy by Matt Whitacre

In fifth grade, Timothy was a normal kid with normal interests except one thing. Most of his friends wanted to travel to places like England or Italy. But not Timothy. He wanted to go to Mongolia. No one else seemed to care about this far-off country, but he was fascinated with the people and the culture.

Life moved forward and Timothy went from path to path trying to find his place in the world. He considered many different careers, including marriage and family counseling, but none of them stuck.

Eventually he took a job as an oil surveyor and moved to a new city. Little did he know this new town and a new church would alter his life forever.

The church offered a mission trip to East Asia and Timothy felt the Lord leading him to join the team. It wasn’t Mongolia, but he was getting closer. Timothy’s time in Thailand jolted him. The need for Bible translation became apparent and something clicked. For years he had been praying about what to do with his interest in linguistics and languages. Was this it? Had he finally discovered his calling?

He came back to the U.S. with a new passion for missions. Some conversations with (Wycliffe) missionaries led him to confront two promises he had made to himself, just a few years prior: “I’m never going back to school after college.” And “I’m never going into full-time ministry.”

With a surrendered heart, humble before the Lord and excited to pursue a new direction, Timothy enrolled in Biola University’s Master of Arts program for Linguistics and Ancient Languages.

He loved his studies and grew in his relationship with God. But this one question continued to nag him: “Where are you going to serve?” It is a natural question for seminary students to ask each other but it was a question that haunted him.

During a meeting of missions-minded students, Timothy met a former missionary to the Congo. He mentioned his struggle to find the place of service. Unexpectedly, the missionary asked him, “What about Mongolia?” The suggestion startled him. Memories of school-yard games and a long-ago interest in the Mongolian people flooded his mind. It was overwhelming. He took these experiences and possibilities to the Lord.

The more he prayed and talked with others, the more he grew convinced this was his path. But how? With whom?

Enter Denny and Debbie Merritt, beloved OMF mobilizers who visit the Biola campus from time to time. One day they were on campus with their table when Timothy walked by. Did OMF serve in Mongolia? Yes. Did they have an opportunity for him to visit and learn? Yes. “Sign me up!” he said.

In the summer of 2019, Timothy went on a Serve Asia trip to Mongolia. Almost instantly he felt at home. The pace of life, the sense of humor, the curiosity and hospitality of the Mongolian people all led him to feel like this was where he was supposed to be. 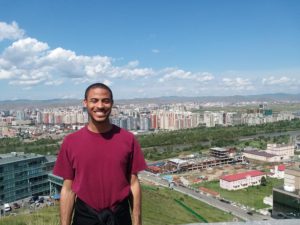 During the trip, he discovered God was already working through Mongolians to translate the Bible into remote languages. They didn’t need him. So how could he plug into ministry in this amazing country?

One possibility came to the surface toward the end of his trip. Timothy learned that one of the needs in the Mongolian church is helping the people pursue godly marriages. And one way they can do that is by translating marriage and family books.

Could this be his calling? Could it be that his passions for Mongolia, linguistics, and healthy marriages and families could all come together? Could it really be that all these divergent paths, each one pursued by the leading of the Holy Spirit, have finally converged into one straight path?

Only the Lord knows the next part of the journey. COVID-19 travel restrictions slowed down Timothy’s sprint to apply as a missionary to Mongolia. In the meantime, he is praying, learning the language, and mobilizing others to know what God is doing in Mongolia.

Take a moment to pray for Timothy and for the three million people in Mongolia who still need Jesus.

Pray for the Skylands

We invite you to pray for the Skylands peoples. Your prayers will open doors, encourage believers and bring glory to God.