Is God Calling Me Out of Ministry?

You’ve been faithfully serving as a missionary to Japan for 10 years. Your spouse is depressed, you’re depressed and everything within you is screaming for you to pack up and go home. Should you?

You’ve almost finished raising support, but the country you felt called to is now politically unstable and physically unsafe. Is God still calling you and your family to overseas missions?

You’re sure God called you to your current company, you feel completely burned out and everyone around you thinks you should quit. But you don’t have a sense of God “releasing” you or “calling” you somewhere else. Does that matter?

And why can’t I think of a single Biblical example where someone decides to quit or change the ministry God had originally called them to? Is such a thing even possible to begin with? And if I’m really honest, why does that feel so unnerving?

This is one of those posts where I really don’t have all the answers. But after floating this topic to some of my friends, I’m convinced it’s a conversation we need to have. Most missionaries experience some degree of guilt or shame when they inevitably leave the field, but missionaries who quit without a good “reason” experience that on a whole different level. How can we better support them through that transition?

Perseverance Is Necessary, Especially in Missions

The Bible leaves little doubt as to the importance of perseverance as a virtue. The Bible is, after all, littered with examples of people who are rewarded or commended for their perseverance (think Joseph or Daniel or Moses or Abraham or Job or Mary.)

As for specific references:

And if something leads to godliness, it’s probably important. (As an aside, it’s also worth noting how interconnected persecution and perseverance are in the examples above.)

But how does the principle of perseverance apply to everyday life? Like most things, this looks really good on paper. After all, if God called me to whatever, then God should also give me whatever I need in order to endure anything and everything until that goal is accomplished! I can do all things through Christ who gives me strength. Right?

But What If I Need (or Worse, Want) To Quit?

The mission world is bursting with resources about being called INTO missions. Even a cursory glance at your favorite search engine will provide you with all kinds of videos, books and blogs, ranging from how to discern a call to challenging our very understanding of what “calling” even implies. However, try looking for resources describing when God calls you OUT of missions, and you’re left with…not much (To be fair, I sure don’t want to be the one to write that book, either!)

In other words, we have a glamorous, supernatural-laden vocabulary for when we begin missions (or start a new job, or graduate, or join a ministry next door), but we don’t really have a vocabulary, or more importantly, a theology, for when we want to quit the same thing we felt called to ten years prior.

Things are relatively straightforward if I’m forced to leave the field without a choice in the matter—say, because my visa got revoked or the government kicked me out. But what if I “just” want to leave because I’m depressed or burned out or because I can’t learn the language? Does that mean I’m a “failure” of a missionary? Am I sinning by “running away?” And wasn’t God supposed to give me whatever I needed to fulfill that calling?

To clarify, I don’t think there’s a magic formula or an easy way to definitively answer the question of how (or whether) God calls us out of a particular situation we previously felt called into. Every scenario is going to be different. However, I think it’s still incredibly helpful for us to consider some of the different pressures that missionaries potentially experience as they leave the field.

The Ex-missionary Hierarchy and Post-mission Shame

At least in the mission world, I think we have an unspoken hierarchy of different reasons to leave. It looks something like this: 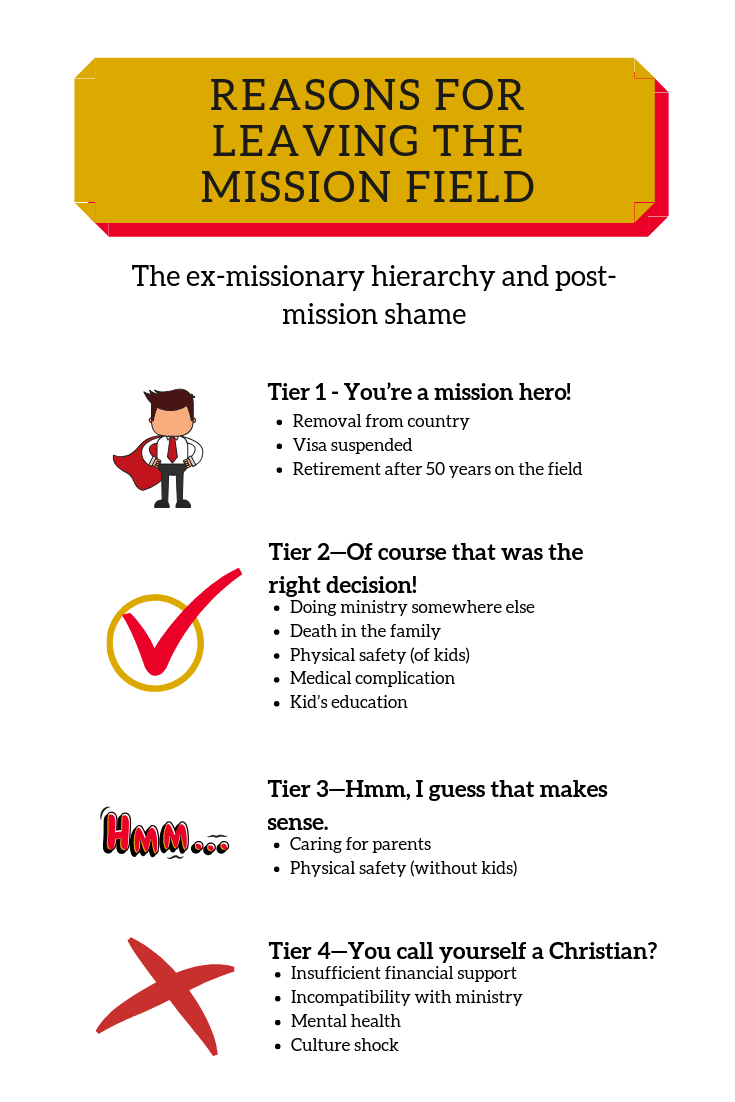 Obviously, your community’s hierarchy may look different based on your values, but the general principle still holds. For those in the US, for example, most child-based reasons for leaving the field are ubiquitously labeled “acceptable” whereas mental health or financial reasons are not.

The important application here is the lower someone finds themselves on the hierarchy, the more potential shame or guilt they are likely to feel if they do end up leaving. Or looking in a slightly different light, the lower someone is on the hierarchy, the less likely that person leaves in a spiritually and mentally-healthy state, at least when it comes to shame and self-perception. Having your visa revoked certainly comes with a wide range of other difficulties, but shame isn’t generally one of them.

Developing a Theology of Calling (and “Un-Calling”)

Internal and social judgement aside, the real question almost every missionary faces is how to resolve their situation theologically. In other words, we need to grapple with our original question of what it looks like for God to call me OUT of this particular situation. Some examples of these questions include:

I don’t know. At all. I haven’t really heard much about this topic before.

If you ever find yourself in this position of struggling to leave your “place of calling,” I’d like to encourage you that you’re not alone. While we may not talk about it, a lot of others are either going through or have gone through something very similar. (At least that’s been my observation while talking with others.)

And most importantly, don’t be afraid to bring all of this frustration, shame, fear, rage, confusion and so on before God. Easier said than done, I know.

Finally, if you do run across a missionary who either wants to leave or has to leave the field, please, please, please be willing to ask them how they’ve been able to process all of this. For many, this may be one of the few chances they get to really talk about it. 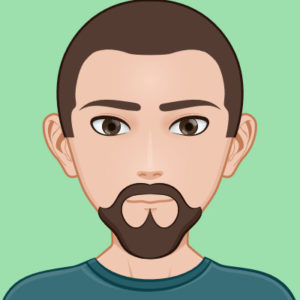 John worked 10 years at OMF (U.S.) as a mobilizer-data analyst-coder-teacher-writer. His passions include running, satire, coding, board games, mobilizing the American church and medium-length walks on the beach.

I think I was in ministry for wrong reasons. Although wasn’t in foreign ministry, it was self motivated, self inspired and an ego trip. No open doors either . fought too hard to get in. I’m ok with that because understand that Heaven or church ain’t going to shut down if don’t. I was on ego trip trying to make a name.

There are types of ministry just because one thing you were doing like pastoring means you no longer minister it’s not true…
Take the ministry to something greater like being a better husband or father or work at the city food pantry…
Even giving a glass of water to someone thirsty in Christ name is ministry.

0
Icons made by Smashicons from www.flaticon.com
wpDiscuz
2
0
Would love your thoughts, please comment.x
()
x
| Reply