Jim was one of the finest men I met. He was humble, kind and encouraging to all of us staff in the Littleton Office when he served as Interim US National Director.

Jim Morris had the blessing of being raised in a Christian Home. In his application paper to the China Inland Mission (CIM/OMF) in November of 1956, Jim stated, “At the age of 15 I attended a Youth for Christ (YFC) Convention and there I surrendered my heart and life to Christ in accepting Him as my personal Savior. Soon after my conversion, I realized that Jesus had purchased my body with His blood. I took my hands off my life and gave my all to Him. It was then I felt God’s call to the foreign mission field to the Far East.”

In his high school years, Jim took part in Bible Quizzes sponsored by YFC, memorizing several of the epistles. At the age of 15, he also had opportunities to preach.

Jim noted that his express purpose in going to Prairie Bible Institute was to prepare himself for service abroad. He stated, “Over these 7 years since I felt my call, that desire has grown brighter until I feel: ‘Woe is me if I go not.’”

Preparing for the Mission Field

During his Prairie days, Jim prepared for his overseas service by leading Sunday School classes, preaching in rural areas, being a leader at a Bible Camp, and traveling as part of the Prairie Trumpet Trio. Beginning in the summer of 1956, following his graduation from Prairie, Jim served under the Canadian Sunday School Mission in camp work and pioneer evangelism work trying to reach the “otherwise unreached”.

When asked by the CIM of his motives for offering work overseas he replied, “God has called me to the Far East; therefore I must go ‘by love compelled in my body whether it be by life, or by death.’ Souls are lost. I have the Savior. Why should I not go and tell them of Him?”

One of the many glowing references that were sent to CIM on Jim’s behalf stated, “Jim, to me, is one of the most superior examples of growth in the Christian life that I have ever known. I regard Jim highly as a spiritual instructor because of his life.”

Jim and Louise Worked With the Pwo Karen

Having met at Prairie Bible Institute, it was not an easy decision for Jim and Louise to wait on marriage until they had been on the field for two years. However, after much prayer, they decided they were to follow the guiding of the leaders of the CIM and so they waited – two years to the day of their arrival on the field!

Jim and Louise worked for 16 years among the Pwo Karen of Thailand, and saw very little in the way of results. In Jim’s Senior Missionary Certificate report dated 1963, it was noted by his field director that “(Jim) has faithfully and zealously pressed on in learning the language and evangelizing among the Pwo Karen, and shown willingness to suffer and endure in the Lord’s service.”

In a 1971 Furlough Report the Director noted, “Jim is a solid plodder and faithful in his work. This has been a very hard term for him and they have not had the encouragement of seeing a spiritual response amongst the Pwo Karen. Nevertheless, they have tackled their commitment with faithfulness.”

Then in 1974, God answered the prayers of many for breakthrough among the Pwo Karen in the hills of northern Thailand. Jim and Louise worked another 16 years to disciple the believers, train the leaders and to mobilize a church-planting movement in Pwo Karen land. They were involved in reducing the language to writing, Bible translation, literature production, literacy teaching, simple medical work, itinerant evangelism, church planting and leadership training. Their challenges and victories are well documented in the wonderful book that Louise authored, Stronger than the Strong.

Filling Other Roles in Missions

At various times, the Morrises would temporarily be called away from direct involvement with the Pwo Karen. 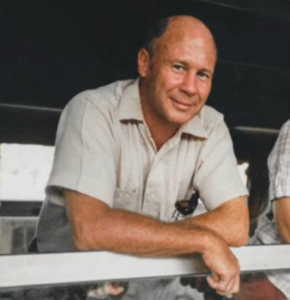 They were asked to serve in a variety of support roles, including teaching at North Thailand’s Phayao Bible Training Center, being house parents to missionary kids, supervising workers in the Orientation Course at OMF International Headquarters in Singapore, serving as the North Thailand Field Leader, and as the OMF International Director for Overseas Ministries.

In 1978, Jim’s Field Director remarked, “The work among the Pwo Karen and latterly the decision to work amongst Sgaw Karen has continued to be a great encouragement to Jim and Louise. Jim’s position as leader in the Karen team is crucial at this stage of building the team up and with many first-termers in it. Jim and Louise are an excellent couple.”

As Jim, himself, addressed their term ending in 1987 he wrote, “A short term divided into two halves – almost a year with the Karen and a year plus as North Thailand Superintendent. Our time with the Karen was encouraging, seeing God working and Karen responding. While we were content to work with the Karen for the rest of our missionary career, we accepted from the Lord His clear guidance to be the North Thailand Superintendent. This has been a challenging and stretching job. I do not feel adequate to its demands. I am not naturally an administrator nor a people person. But the Lord is helping and I am finding ‘job satisfaction’ as He enables me to do what He has called me to do.”

Jim and Louise served in the OMF US Headquarters office as Interim National Director from 1998-2000. Even though they were officially documented as “retired” in July of 2000, Jim took on a new role as the U.S. Strategy Coordinator “Reaching East Asia’s Peoples”.

When looking back on Jim’s life, I am confident no one can argue that he has fought the good fight, he finished his course, and he kept the faith. Jim has served his Lord and Savior well, and will be missed tremendously by all those who were blessed to know him.

Icons made by Smashicons from www.flaticon.com
wpDiscuz
4
0
Would love your thoughts, please comment.x
()
x
| Reply