Ann Soden, Missionary to the Philippines

Precious in the sight of the LORD is the death of his saints. This Precious Saint, Ann, is now rejoicing in the presence of Jesus Christ and, while we grieve her loss, we do not do so as those without hope. We who know Jesus as our Lord and Savior can rest assured that her absence is only temporary, until we reunite with her and Jesus for all eternity.

In Ann’s autobiography written in 1956 as part of her application to the China Inland Mission (CIM), Ann noted that since 2nd grade she had wanted to be a teacher. Upon giving her life to the Lord, her view was expanded to becoming a missionary teacher. Ann recognized she could look back on her life and see how God was preparing her for missionary service.

When Ann was asked her motive for offering herself for foreign mission service, she responded, “The Lord has shown me that He is leading me to the foreign mission field. I have never been content or had peace in thinking of doing any other type of work. I believe the initial step toward the mission field came when I dedicated my life to the Lord to use as He pleased, at the age of 12 or 13. The final step of writing to a mission board has come through the leading of the Lord, as I realize my training for missionary service is nearly completed.” 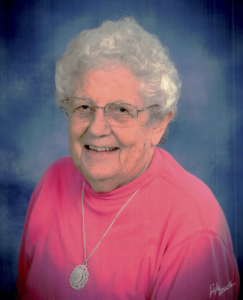 As part of Ann’s final application to CIM she noted, “I have come to realize that in myself I will never make a missionary, let alone a “good” missionary. It is only as I allow the Holy Spirit to control my life that the Lord will make of me the person needed for the task He has for me to do. This is my earnest and daily prayer.” Ann was accepted into membership in the CIM, and sailed on March 13, 1958.

Ann served in Calapan from October of 1958 through February of 1959, moving to Abra de Ilog and Iraya Mangyan until January 1960, and then on to Mansalay and Hanunoo Mangyan prior to her first Home Assignment (HA) in October of 1962. During her HA, it was requested that she submit a contribution to an issue of the (CIM) Millions magazine featuring young missionaries. Not only had her writing skills been discovered, but it was believed that her “unusual” first term of so many stations would make for interesting reading!

Ann’s Mid-Term Field Assessment in 1972 noted that, after more than ten years in Hanunoo work, not all of which had been easy ones, she had recently been released to the Bi-lingual Schools ministry, a program which had been started and developed by her during the previous two years. It was felt that Ann had really found her niche in this type of work and was making an increasingly valuable contribution.

“I have come to realize that in myself I will never make a missionary, let alone a “good” missionary. It is only as I allow the Holy Spirit to control my life that the Lord will make of me the person needed for the task He has for me to do. This is my earnest and daily prayer.”

In a 1973 Furlough Report it was noted, “Ann has done a very fine piece of work in her Teacher Training Program, providing teachers at elementary level for Mangyan children for whom there are no government schools. She is a capable, resourceful, well organized and well-disciplined missionary, and has enjoyed this work this term.”

Called Back to the US

We can only imagine the tremendous disappointment when it was learned that, after completing 16 years in the Philippines, Ann sensed God leading her away from OMF to serve Filipinos in the US.  While she wasn’t sure why God was calling her to do so at this time, she knew she needed to obey. As a result, she resigned on September 1, 1974.

The response of the CIM Directors to Ann’s resignation showed how they valued her. She had accomplished much in her years in the Philippines. They treasured Ann and saw how capable and effective she was. They were disappointed to lose her.

One Director wrote, “It goes without saying how very sad we are to lose you from the Mindoro Team. One can only guess at how big is that hole which you left behind.” Another noted, “We have truly treasured your contribution to the life and health of the tribal church in Mindoro, and just to that very degree we lament the loss of such a gifted and experienced worker.”

A Happy Return to the Philippines

Two years after her resignation, Ann once again felt God leading her back to the Philippines. The situation that sealed this leading of God was a letter from the man she had left in charge of the Mangyan Christian Elementary Schools. He wrote of how many new schools were being opened and how desperately they needed her leadership and assistance. Ann was reinstated in OMF in 1976.

There were notes expressing how delighted the field workers and directors were that Ann was returning. People commented, “You have certainly set the joybells ringing in many places in the Philippines with the news which you…conveyed to me in your October letter concerning the Lord’s calling, clearing the way for you to return here to the Philippines with OMF…We are all so thrilled to know you will soon be back in our midst again.”

In Ann’s Mid-Term Assessment in 1979, the superintendent commented, “Ann certainly does a splendid piece of work with her Mangyan Christian Elementary School programs and helped setting up an equally good Adult Education program with the Mangyan Development Program of which she continues to serve as a consultant. I have very high regards for her significant contributions.” Another leader noted that Ann had returned with a fresh commitment both to the Lord and to the work He had entrusted to her and that her contribution in both the Children and Adult Education Programme was “of the highest order.”

Again in the 1984 Mid-Term Assessment, there were glowing testaments of Ann’s skill and value. It was noted that they appreciated the work Ann had done with the Mangyan Christian Elementary Schools and particularly her training of Mangyan to take over the leadership and the training within this program. During that same term, her flexibility and willingness to take on other ministries as the Calapan Mission Home Hostess and at the Batangas Language Center were commended.

The 1986 Pre-Furlough Assessment noted that Ann had worked herself out of her project because she was an excellent trainer. It was once again mentioned that Ann was one of the most versatile people on her team and that she was much appreciated for her willingness and ability to serve in a number of roles during that term.

Faithful Through Every Stage

Ann’s intention was to take her HA and then move into a period of sabbatical in which she would take correspondence courses and write the children’s book she had sought to write for several years. However, God once again led her in a different direction than expected. She was obedient to His calling and was granted a Leave of Absence to care for her mother. It became clear that Ann should remain in California living with and caring for her mother. Once again, it was with sadness that OMF accepted her resignation as of October 1, 1989.

At one point in her initial application to the CIM, Ann remarked that as a single woman, she was tempted to remain in the US. Perhaps she should wait for “The Right One” to come along. However, God called her to the field and Ann obeyed, even if it meant she might remain single for the rest of her life. It was so delightful to see in her later years, how God blessed Ann’s faithfulness. Not only did He allow her to be a missionary, but he later blessed her with an entire family when she became the wife of Jim Soden.

As I think of the many lives that Ann touched and may not have even been aware of, I wonder if Ann’s reception into heaven was summed up in a comment by Max Lucado. “When you arrive in heaven, I wonder if Christ might say these words to you; ‘I am so proud that you let me use you. Because of you, others are here today. Would you like to meet them?’”