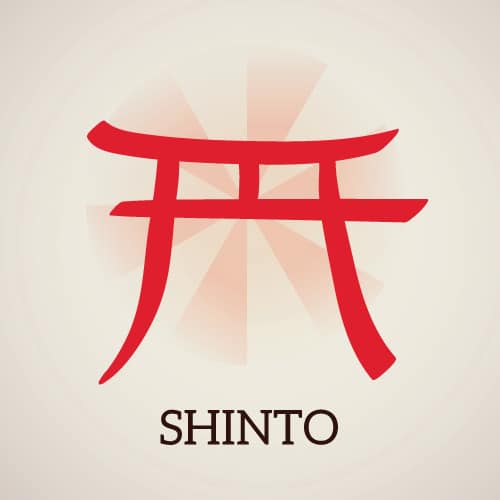 Shinto is a mix of ancient religions and religious rites which have been followed in Japan since prehistoric times. The literal translation of Shinto means “the way of kami,” or “the way of god,” though Shinto followers worship no Supreme Being. The kami are various objects of the natural world, as well as ancestral beings, that are believed to possess supernatural forces.

Shintoism is less about a belief system and more about the rituals performed to revere kamis and the divine presence within them. Japanese culture is deeply influenced by Shintoism, such that even Japanese who claim no personal religion can be found engaging in Shinto rituals.

Shinto is a mix of ancient religions and religious rites which have been followed in Japan since prehistoric times. The first Shinto writings date from the early eighth century a.d. and describe myths, prayers and religious rites. However, it is not known how accurately these descriptions record early religious practices and beliefs.

It appears that the ancient religions of Japan were animistic, focused on a supernatural force inherent in nature. The agricultural year and phases of the moon were important, as was clan loyalty. Local shamans represented the gods (kami) and averted evil spirits. The roots of contemporary Japanese dance, art, literature and music can be found in the ancient shamanistic rites.

Buddhism, Confucianism and Daoism came to Japan in the sixth century a.d. In consequence the ancient Japanese religions gradually became more sophisticated and defined. The many local gods became a pantheon of gods and official shrines diluted the importance of local customs and shamans.

Around a.d. 593 Buddhism became the national religion, helping to bring unity to Japan after years of clan warfare. However, clans still followed the ancient Shinto ideas and upheld their importance. In the late seventh century unity was attempted by several emperors who stressed the equal standing of both Shinto and Buddhist rites. At the same time, Shinto was elevated and given stronger national identity by connections with the imperial family. The imperial ancestry was traced back through real and legendary emperors and empresses to Amaterasu, the sun goddess and great grandmother of the first emperor.

The imperial court had the first Shinto histories written as part of their claim to ancestry. The Kojiki (myths) was written in 712 and the Nihongi (rituals, prayers) in 720.

From the eighth to the seventeenth century, Buddhism and Shinto interacted significantly. To the Japanese, the Heian Period of a.d. 794-1185 was the flowering of classical culture. At this time, Japanese Buddhists introduced the doctrine of honji suijaku (meaning “true nature, trace manifestation”). This doctrine aligned all buddhas and bodhisattvas with Shinto gods. The Shinto gods were believed to be expressions of buddhas or guardians. Buddhism was the true nature, of which the Shinto gods were manifest traces.

In response to this unification, a school of “purified Shinto” developed in the late thirteenth century. For followers, Buddhist influences were dropped, and the importance of the shrine system stressed. Deep awareness of Japan’s spiritual uniqueness and the divine nature of its imperial family gave this school of Shinto a strong identity. The same school then adopted the honji suijaku doctrine in reverse, considering buddhas and bodhisattvas as manifest traces of the true Shinto gods.

During the seventeenth, eighteenth and nineteenth centuries, Shinto became increasingly involved in nationalist ideologies as a military government brought unity and peace. Francis Xavier introduced Christianity to Japan and began the “Christian century” (1549-1649) in which about 10 percent of the population is thought to have been Roman Catholic. But Christianity was then banned by the government as part of a crackdown on foreign influences. Buddhism was declared a state religion and Confucian ideals were promoted in order to gain loyalty to the state and a sense of moral duty. As the period progressed, Shinto was promoted by followers as historically and intrinsically Japanese. Its claim to the sanctity of national traditions and the legendary divinity of the imperial family helped to engender a dislike and distrust of foreign practices.

In 1868 the military government was overthrown and the feudal system consequently crumbled. A new parliamentary system was implemented in 1889, influenced by Western democracy. A “non-religious” Shinto was promoted, again stressing the divinity of the emperor and the uniqueness of Japan. Confucian ideals such as loyalty and respect for parents and elders were also promoted by the government.

Shinto in the Twentieth Century

Shinto was used by nationalists to support involvement in the Second World War. But after 1946 the Emperor’s aspect of divinity was officially denied and Shinto was disestablished. Shinto teaching in schools was discontinued and visits to shrines became voluntary. In recent years, bowing to the national flag and singing the national anthem, a hymn of worship to the emperor, were reinstated in schools and at official occasions.

Today most Japanese do not regard themselves as religious, but most follow cultural practices of Shinto and Buddhism. The official attitude is that Shinto is not a religion, but a set of customs observed by the Japanese people. Generally, weddings are Shinto or Western, held in hotels, and funerals are Buddhist. Babies are dedicated at 100 days old. A Shinto priest is usually called in for a ground-breaking ceremony for a new building. (Japanese houses are rebuilt every 20 or 30 years.) Significant transitions in the life of a company may be celebrated officially by a Shinto priest, with staff obliged to attend. Cults and new religions are followed by about 24 percent of the population. About one percent is Christian.

Shinto is based around individual shrines. Shrines have been built for reasons that include geography (e.g. mountain shrines) and history (a significant, perhaps auspicious local event). Each shrine usually has a kami (god), which may be a topographical feature, historical figure, or a god mentioned in Shinto writings. The kami is usually said to reside in an object, such as a stone or mirror.

Shrines are approached through one or several large gates (torii) built of two large uprights and two crossbars. A large trough of clean water stands inside the gates, under a roof. This is used for ritual purification (washing of hands). There are usually several shrine buildings: a worship hall, a main hall and sometimes sub-shrines. Visitors do not usually enter the buildings. They stand outside the worship hall, throw a coin in an offering box, pull a bell rope to bring their presence to the notice of the gods, clap their hands, pray, then clap their hands again before leaving. Special groups of visitors may enter the worship hall to pray. Nobody enters the main hall because it is the earthly location of the shrine gods.

Japanese people visit shrines for many reasons, including seeking personal material benefit, good luck for exams, success in business, a safe journey or good health. Many people visit shrines on the first three days of the new year. Protective charms can be bought, and are kept, sometimes on a god shelf, with satsumas and rice cakes, until the next new year, when they are burned at the shrine.

Children aged three, five and seven are taken to the shrine for a special blessing in November.

Shinto priests are usually men and a son will inherit the appointment from his father. Shinto maidens assist in ritual and administrative duties.

Shinto festivals usually center around a procession or fair. The procession often includes a portable shrine and symbolizes the god’s journey around and protection of the local area. A festival is a time to visit family.