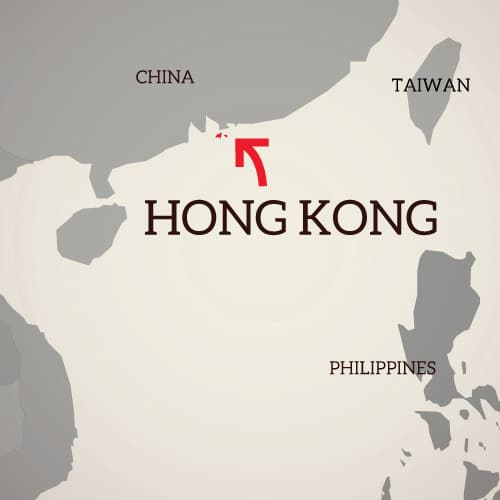 Hong Kong was once a British dependency in East Asia but is now a Special Administrative Region of China. It is strategically placed to have an economic and spiritual impact disproportionate to its tiny size.

There has been rapid population change because of the changing political fortunes on the Mainland. Chinese culture dominates in Hong Kong. Yet, as a port inhabited and visited by people of many nationalities, it is subject to diverse influences, especially that of the West.

Most people adhere to a version of Chinese folk religion, which combines elements of Buddhism, animism, Confucianism, Daoism and other beliefs. There are over 360 Daoist and Buddhist temples. Generally, people follow these traditions as required by family.

Cantonese is the mother tongue of the vast majority of the Chinese population. English is second in importance, followed by Mandarin.

Hong Kong has a land area of only 648 sq miles. There are three main regions: Hong Kong Island, the mainland Kowloon Peninsula and the New Territories/Lantau Island. Much of Hong Kong is hilly, and much of the low-lying terrain is reclaimed land. Only 28 percent of the land is rural.

Although within the tropics, Hong Kong has a subtropical climate because of the southwestern monsoon, a moist, warm, equatorial wind that brings a rainy season between May and August. The average annual temperature is 72°F (22°C), with a range from 50°F (10°C) in February to 92°F (33°C) in July. Typhoons occasionally cause great destruction.

Before the British occupation, Hong Kong had a small fishing community and was a haven for pirates and opium smugglers.

Because of its excellent natural harbor, Britain first used the island as a naval base during the Opium Wars with China. In the Treaty of Nanking (Nanjing) in 1842, which ended the First Opium War, Hong Kong Island was ceded to the British in perpetuity. Following a second conflict in 1860, Britain acquired Kowloon and in 1898 obtained the New Territories under a 99-year lease.

After Japanese occupation during World War II, Hong Kong swiftly regained its status as a major Southeast Asian trade center. Many thousands of Chinese took refuge in the colony before and after the 1949 Communist victory in Mainland China, providing labor, entrepreneurial skills and money. The resultant economic boom transformed Hong Kong into one of Southeast Asia’s wealthiest and most productive areas.

In 1997, Hong Kong reverted to Chinese sovereignty. According to the agreement with China, the territory is allowed to maintain its legal, social, and economic systems until 2047. In practice, most people expect these liberties to be “trimmed.” China is responsible for foreign affairs and defense.

Hong Kong was once famous for manufacturing, but in recent years has moved away from this towards services and processing exports from China. It is a banking and business center.

In common with other East Asian countries, Hong Kong was hit by recession with the Asian financial crisis of 1998. It suffered further recession in 2001 and 2002 during global financial changes. In 2003 Hong Kong’s economy was affected by a SARS (Severe Acute Respiratory Syndrome) outbreak. In recent years, the economy has revived with a tourism boom and a rise in exports.

Hong Kong, with its advantageous location at the doorstep of the Mainland and strategic positioning as an international financial center and regional business, trade and tourist hub, is poised to leverage on the growing economic prowess of the region.

Most denominations were present during Hong Kong’s early days, leaving many Western-style church buildings as their legacy. The majority of the 1,000-plus congregations now meet in improvised accommodation, often two or more converted apartments. Land is at too much of a premium to be allocated for new churches.

1950-52 saw the great exodus of missionaries from China through Hong Kong. OMF International (then the China Inland Mission) set up an administrative office to handle these matters. Some missionaries stayed to work among the many Chinese refugees. There were many other mission agencies, so OMF International focused on producing desperately needed literature. The company which was formed is now fully independent and a major publisher of Christian literature throughout the Chinese-speaking world.

OMF International later concentrated on evangelism, preaching, teaching and partnering with the churches. As new towns were constructed, OMF International and the Chinese churches sought to evangelize the high-rise concrete jungle. We have also worked with blue-collar and underprivileged peoples in grassroots evangelism.

Christians are needed to work with young people and students, in theological education and leadership training.

The Hong Kong church today contains a mixture of nominalism, vitality, youth and fear of the future. Many remain unreached by the gospel. Recently, there has been an increased emphasis on united church intercession for Hong Kong, China and beyond. This has brought churches together in large evangelistic events and inter-church prayer meetings. OMF International has sought to widen the vision of the Hong Kong church and mobilize its members as missionaries. About 57 percent of congregations now have a mission vision and active participation. Since 1997, much of this involvement has been outreach to the southern provinces of China.

Student ministries have also flourished recently, with about 30 percent of university students professing a Christian faith.

Less-reached sections of the community include: