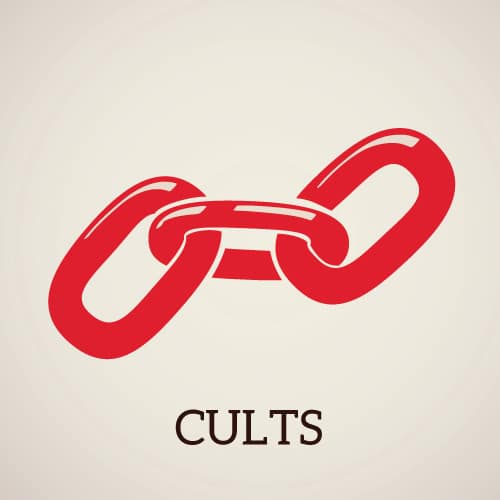 A cult is an unorthodox, deviant religious group, which is devoted to a person, thing or set of ideas. People who join cults are often dissatisfied with the world or unsure of their place in it. Cults offer answers, asserting that the world is corrupt and unreliable. It can be difficult to leave a cult. The world outside can seem frightening and evil.

Cults usually teach how to behave, live, think and sometimes how to use their money, what to wear and where to live. Most cults require worship of or dependence upon the leader and encourage dependence upon other members or the whole group. Some demand a promise of commitment, an initiation ceremony, financial input, active evangelism, participation in ritual.

Teaching: Moon’s Confucian parents became Christians when he was 10. Five years later he had a vision of Jesus instructing him to finish establishing God’s kingdom on earth. Moon believes he is the Messiah of the Second Coming and his wife the Holy Spirit. They are believed to be the first couple able to produce children with no original sin, since sin is based on genes. Nature is dualistic: male and female, positive and negative, internal and external. An aspect of God called the Universal Prime Energy created the cosmos. The Unification Church sends out missionaries and holds mass weddings.

Use of Christian teachings: Jesus is not God but a “true person.” The Bible is accepted as scripture but the Trinity is not recognized. The thieves crucified with Jesus represent democracy and communism. The fall was caused by the sexual sin of Eve and Satan. Moon has been involved in occult practices, owns over 300 businesses and financial institutions and uses politics and philanthropy to gain followers.

The Church of Jesus Christ of Latter-day Saints

Founded: 1830, by Joseph Smith. Known as the Mormon Church today.
Membership: Over 15 million worldwide, two million in Asia. The world’s fastest growing “Christian” cult.
Based on: Christianity, teachings of Smith/others.

Scripture: The Bible, The Book of Mormon, The Pearl of Great Price, Doctrine and Covenants.

Teaching: Joseph Smith claimed that when he was a teenager in New York State, he had two visions from God, in which he was told not to join a denominational church, and to translate the Book of Mormon, written on golden plates buried near his home. Smith published the Book of Mormon in 1830. He also claimed that John the Baptist ordained him to finish restoring the true church by preaching the true gospel, which had been lost from the earth. Mormon teaching describes God as “an exalted man,” with a human body and Jesus as the firstborn of God’s spirit children, a god in flesh. Lucifer was the second. All humans followed. The Trinity is three gods.

Founded: 1879, America, by Charles Taze Russell.
Membership: Over 3 million worldwide; prominent in Japan.
Based on: Christianity, teachings of Russell/others. Sometimes considered a sect rather than a cult.

History: Russell was born in 1852 in Pennsylvania. He organized a Bible study class when he was a teenager. He had no formal theological training but was made “pastor” of the class. In 1879 he began publishing the magazine Zion’s Watch Tower, in which he discussed his interpretations of the Bible. In 1884 Russell founded The Watch Tower Bible and Tract Society to aid in the publishing and distribution of his teachings.

Teaching: The Watch Tower Bible and Tract Society claims that it is the channel for the flow of biblical truth to the world. There are no articles of faith or written doctrines as such; all beliefs are made clear in their publications. Followers do not believe in the Trinity and therefore do not believe that Jesus or the Holy Spirit is God.

Scripture: Writings of Ashara, based on Buddhist, Hindu and Taoist ideas and Christian apocalyptic vision (Revelation).

Teaching: Suffering can eliminate bad karma. True faith can enable believers to fly and meditate underwater without breathing. Members are responsible for the deaths of 12 people and injury to 5,000 in an attack of sarin gas on Tokyo’s subway in 1995.

Teaching: All religions teach the same truth and are based on the inner Divine Presence. “The Word” in John’s Gospel refers to “the Inner Sound,” which is within all life and heals and sustains the universe. Practices include prayer, contemplation, meditation, vegetarian diet and following five precepts.

Many groups in China have claimed roots in Christianity. These include:

Teachings: Followers worship their founder as the reincarnated Christ. Practices involve secret code, faith healing, raising the dead, belief in an imminent Second Coming, tithing and false teaching. The group encourages children to quit school and gain all of their education from the church.

Teachings: Followers are told that a Henan woman named Deng is the newest incarnation of Jesus Christ on Earth. They are known for their opposition the Communist Party (calling it “the red dragon”) and their doomsday predictions.

There are more than 240 new religions in Korea. Most have grown out of the Tonghak Movement (see below). Membership ranges from 10 to 600,000. Most involve the worship or following of a divine leader, dead or alive. Most are syncretistic, some are nationalist.

Ch’ondogyo
Religion of the Heavenly Way, formerly the Tonghak Movement

Involves: Grew out of the Tonghak Movement of the 1860s, a rural revolution against the government and reaction to the “Western Learning” of Roman Catholicism. Tonghak taught that “man and God are one.” Ch’ondogyo teaches that all human beings are equal, “contain divinity” and deserve respect.

Beliefs: Followers believe in something they call the Divine Power, which emanates from the ultimate Truth, the one principle of eternal immutability. It cannot be described, only experienced. Followers believe that God came to earth, became one with a human body and founded Shinreikyo. This allows the followers to receive Divine Light, to become spiritual beings.