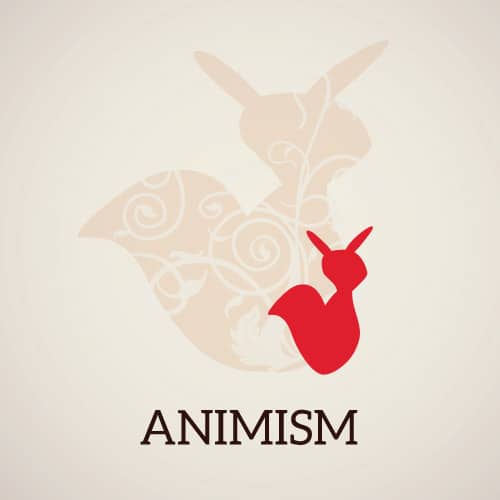 Animism The word “animism” derives from the Latin word anima, meaning soul or breath. It is usually applied to any religious beliefs that recognize spirits or a spirit world inherent in the physical world.

Animism can be found in many tribal or primal religions. Primal religions are those which are ancient, in existence before the advent of world religions such as Christianity, Buddhism and Hinduism. There are many such religions in East Asia, particularly in rural or undeveloped areas, island communities and among tribal groups or minority nationalities. Animism is also found in most of the world religions in East Asia as folk religion.Many people following primal religions live in isolated rural areas. Their lives are built around the forces of nature. Birth, death, illness and disaster are not hidden or sanitized as they are in many developed societies.

Outside forces such as foreigners or neighboring peoples may be feared. Some tribal groups are nomadic. It is easier to be aware of a spiritual dimension to life and when human strengths and frailties are exposed by such environments, there is a need for spiritual support.

Primal animistic religions share essential similarities with world religions: a belief in a powerful spiritual realm that coexists with the physical world; usually prayer, sacrifice or offering to communicate with the spiritual world; shrines, temples or sacred places; priests, shamans or mediums who can help the people to hear from the spirits or gods and sometimes a belief in a “sky god” who is creator and above all other gods/spirits. Animistic folk religions usually grow out of primal religions mixed with one or more world religions. This happens when a world religion is introduced to the area where animistic religions are already practiced. The world religion may seem to predominate, but often its tenets and practices will be less important than, or followed alongside, folk customs based on spirit belief.

The Spiritual Force and the Spirit World

Origin of the Spirits

Some spirits are the souls of deceased ancestors. Others are beings inherent in nature and the spirit realm. For some people the spirits are intermediaries between humans and a higher god. This is often the case in a folk religion, or a primal religion recognizing a supreme god. In other primal religions, the spirits are the primary beings of the spirit realm. As such their help is sought. Sometimes the help of particular spirits is sought for particular occasions, e.g. during illness or war, for marriage or childbirth, or work and study. Help is also sought for better weather conditions or a good harvest.

Relationship with the Spirits

Relationship between the spirit world and the human world is ongoing and requires human effort. Some spirits are seen as friendly and helpful, and gratitude is shown by the human effort of prayer or offerings. Other spirits may be evil or troublesome and need to be avoided or appeased. Human effort is required to ensure the goodwill of the spirits and to ensure that they are not offended or neglected.

For contact with the spirits special methods and/or trained, gifted individuals are usually required. Some tribal groups have a shaman. Shamans enter the spirit world by way of an ecstatic trance. They return to the earthly world with messages from the spirits. Other communities make contact through a medium or through divination. Methods of divination include astrology (e.g. in China), fortune telling (e.g. by selection of a written “fortune” in folk Buddhism) and rituals (in many tribal communities). In many areas, including those where a world religion is established, there are local healers who prescribe rituals to seek healing from the spirits. In rural areas they will also use natural methods (e.g. plants).

The Karen People of North Thailand

“Animists believe everything is animated by spirits. The Karen believe spirits live in houses, fields, water, rice, buffalo and trees. They must all be given sacrifices of food and kept happy lest they become angry and cause calamity to fall on the people. Often we saw offerings to spirits put out along the paths with bits of tobacco, thread and betel nut placed on a piece of old cloth. Besides spirits, Karen believe in taboos that cause calamities when broken, and curses that will kill other people …

“Karen believe they have 33 souls, one for various parts of the body with the main one behind the ear. These must all be appeased with an offering and tied in with strings around the wrists. If one of these souls leaves, the person becomes sick and must make another sacrifice to call back his soul. If someone dreams, his soul is actually doing the things he dreams about. If someone wakes him up from a deep sleep too quickly, the souls may not have had a chance to get back to the body in time, so they must be called back and tied in.”
—from Stronger than the Strong, Louise Morris (OMF Books, 1998)

The Naxi People of Southwest China

The Naxi live mostly in Yunnan and Sichuan provinces. They have a long history and traditionally are a matriarchal society. There is no tradition of marriage; in the past, no one left the family home, and children were brought up by their mother, taking her surname. There is no word for “father” in the Naxi language. Their rich culture has been heavily influenced by the Dongba religion. Dongba is polytheistic, animistic and contains elements of Taoism and Buddhism. The Naxi believe that all forces of nature contain spirits. They venerate ancestors and try to contact ancestors in the spirit realm. Their gods include Sanduo, a “protection god” and Yama, a feared “death god.” There are over 20,000 Dongba scriptures, recorded in hieroglyphs. The Naxi creation myth recorded in the scriptures tells that their ancestor, Tabu, helped them to hatch from magic eggs. The religious leaders, shamans, perform rituals, contact spirits and are usually healers, artists and scholars.