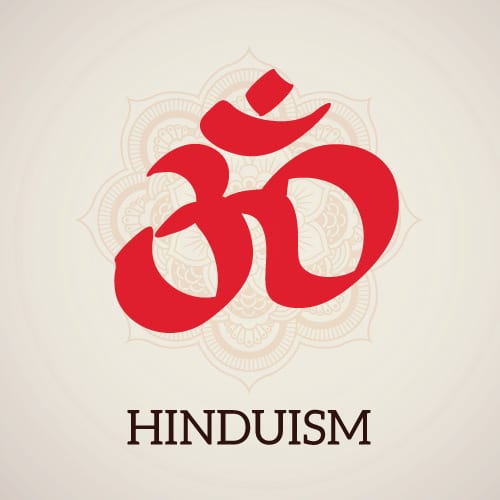 Hinduism is one of the world’s oldest and most influential religions. It is extremely diverse. Different practices and beliefs occur in different countries, regions and villages.

At one time Hinduism was widespread in Southeast Asia. From around 600 b.c. it extended from India into Sri Lanka, Cambodia, Malaysia, Indonesia and the Philippines. In most of East Asia it was later obscured by Buddhism and Islam. It still prevails in Bali and parts of East Java and since the late 1800s has been reintroduced to Peninsular Malaysia.

Hinduism originated in India around 1500 b.c. It was polytheistic and ritualistic. Originally all rituals were simple and performed at home. They gradually became complex and a priestly class was trained to carry out the rituals. The priests thus became a means of access to the gods.

In 600 b.c. the people revolted against the priests, who had become controlling. A new form of Hinduism developed, emphasizing personal meditation rather than priestly ritual. Today there are domestic shrines and rituals, local shrines and famous temples and pilgrimage sites.

Brahman is the ultimate reality; the ultimate source of all being. It is an impersonal, universal force that cannot be defined. The cosmos is an expression of Brahman. Most Hindus believe that they also are expressions of Brahman.

Atman is the soul or self, an inherent, eternal part of all living things, which seeks union with Brahman.

Maya is a central Hindu concept. The visible world is maya; it appears as we see it but conceals a different reality. Time is cyclic rather than chronological, and also degenerative, moving from a golden age through two ages of lesser goodness to the present, degenerate age. At the end of every present age, a fire or flood destroys the universe and a new golden age follows, thus continuing the cycle. Human life is also cyclic.

Reincarnation is when the soul is reborn after physical death into the body of another human or animal. The continuous reincarnation process is called samsara.

Karma determines each new birth. It is based on our ignorance. Having forgotten that we are extensions of Brahman we have followed our desires and are thus bound to the law of karma. We reap what we sow, in the present and future lives.

Moksha is release from karma, death, decay, anger, lusts and maya. This release is attained though understanding and detachment from worldly pleasures. We have to understand that the self does not really exist, and that reality is the oneness of Brahman. This can be reached in three ways:

From ancient times, the cow has symbolized the universe and its gifts to humanity. Cows are givers of life, food, sacrifice and worship. They are not eaten, but milk, urine and dung is used for food, fuel and ritual. The god Krishna is often depicted as a cowherd.

Vedas: These are the oldest Hindu scriptures. They record the religion of the Aryan peoples who settled in India around 1500 b.c. They were nomads, probably from central Asia or the Baltic. Their religion included sacrifice to gods representing the forces of nature. Veda means “knowledge.” There are four Vedas, of which the oldest is the Rig Veda. Each is divided into four: mantras (verses or hymns sung during rituals), brahmanas (explanations of the mantras), aranyakas (reflection on the meaning of the mantras) and upanishads. Upanishads are philosophical, poetic, mystic meditations on the nature of existence, atman, Brahman and the universe.

Ramayana: 24,000 couplets on the life of Rama, a good king and an incarnation of the god Vishnu. In the Ramayana he is depicted as an Odysseus figure. A Ramayana dance is still performed in Cambodia and Indonesia.

The Mahabharata: The story of the Aryan clans, told in 100,000 verses composed over 800 years. This includes the devotional Bhagavad Gita or “Song of the Blessed Lord,” the most popular Hindu scripture.

Hinduism spread to Indonesia in the first century a.d. Islam superseded it in the thirteenth century, except in Bali, which is now the largest Hindu region outside India. Hinduism is also still practiced in much of Islamic East Java, and much Indonesian art is Hindu. Balinese Hinduism is characterized by pantheism and includes elements of Polynesian religions. Most gods are identified with nature. Brahma is associated with fire and volcanoes, as well as creation as in Indian Hinduism. The most powerful gods are those identified with mountains, lakes and the sea.

Around 9 percent of the population of Malaysia is comprised of Tamil Indians, of whom nearly 90 percent are Hindus.

Hinduism spread to Malaysia very early and was important until Islam arrived in the fifteenth century. Traces of Hinduism remain in the Malay language, literature and art. Indian settlers came to Malaysia from Tamil Nadu in the late nineteenth and early twentieth centuries. They were laborers working on rubber plantations and a few English-educated Indians who became forerunners of today’s professional middle class. There is also a Hindu minority from Northern India.

Malaysian Hinduism is diverse, with large urban temples dedicated to specific deities, and smaller temples on estates. Estate temples generally follow the tradition of the Indian region from which the workers originate. Many people follow the Shaivite tradition (worship of Shiva) of Southern India. Folk Hinduism is common, including spiritualism, animal sacrifice and worship of local gods.

Since the Second World War a revival of Hinduism has occurred among Indian Malaysians, with the foundation of organizations and councils to bring unity or to promote reform.