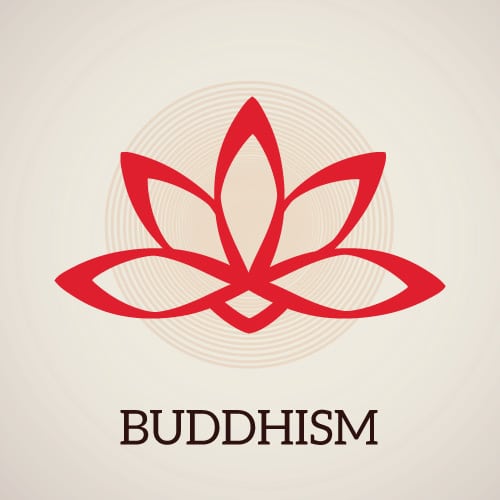 Buddhism encompasses a series of beliefs based on the teachings of Buddha, who was born in the sixth century B.C. Buddha taught that humans are in a state of suffering produced by their attachment to temporal things. Only by releasing our desires can we avoid suffering, and in doing so, reach a more enlightened state. Reaching nirvana—the ultimate state of enlightenment—is the highest goal.

Buddhism originated in India but spread to Southeast Asia and China, eventually permeating most of East Asia. In many parts of East Asia, local animistic beliefs mix with Buddhism to create Folk Buddhism.

Buddhism was founded in the sixth century b.c. by Siddhartha Gautama, later known as the Buddha (the Enlightened One). He was born in former Northeast India (now Nepal) around 560 b.c. At this time Hinduism had been in India for 1,000 years, introduced by Aryan tribes whose cultures had influenced the whole subcontinent.

The son of a rajah, Gautama had a wealthy upbringing. According to tradition, his father was given a prophecy: Gautama would either be a great ruler or a homeless wanderer. In order to prevent the second from happening, his father sheltered him from all influences outside the palace. He was educated and privileged, but he left the palace one day and saw four kinds of suffering. He became dissatisfied and left his home to discover the source of suffering and how to eliminate it.

He first tried to search for knowledge through traditional Hindu methods (e.g. yoga). Then he traveled to northern India and for six years lived an extremely ascetic life. Realizing that asceticism did not bring freedom from suffering, he turned to meditation. At a city called Bodh Gaya, he sat under a fig tree resolving not to leave until he had attained enlightenment (the highest knowledge). After some time he reached enlightenment and became the Buddha.

Despite doubts that people were ready for new teaching, Buddha began to preach and gather followers. He called his path to enlightenment the Middle Way, because it avoided the extremes of affluence and asceticism.

Buddhism grew out of the Hindu world, hence Buddhism inherited some Hindu ideas (e.g. reincarnation and karma) and rejected others. Many teachings and ideas were later absorbed that were not part of Buddha’s original teaching. Some are based on Hindu traditions. Buddhism spread into many parts of East, Southeast and Central Asia, to be superseded by Islam in some areas.

Keeping to the eight-fold path is difficult. It requires commitment and determination.

Nirvana is not a Buddhist “heaven,” nor self-annihilation. It is the end of suffering. The word “nirvana” is derived from a verb meaning “to waft away.” Buddha described nirvana as unlike the earth or anything of the earth, nor like consciousness, nothingness, the sun or the moon. It is sometimes called a transformed consciousness, but is not like the Christian idea of the soul, as Buddha did not believe that the inner person existed. Nirvana can be partially experienced before death, through meditation.

Personality and the Soul

In Western thought, personality is a consistent unit determining the behavior and choices of a human being. Buddhism views the human as part of the universe, an arrangement of ever-changing elements. The soul, self or individual does not exist as such.

As the universe constantly changes and decays, humans also change, decay and reform.

Karma is the moral law of cause and effect. We reap what we sow, in the present life and afterwards. We are bound by the consequences of karma.

Theravada
“Teaching of the Ancients”
A division within Buddhism occurred at the beginning of the third century b.c., primarily over the issue of enlightenment. Followers split into two traditions: Theravada and Mahayana. Theravadins believe that enlightenment is accessible to only a few true believers. The individual moves toward it alone, with no help from rituals or even statues of Buddha, since Buddha and others who have died are believed to have entered nirvana. Theravada is the tradition which most closely follows Buddha’s teaching.

Mahayana
“The Greater Vehicle”
Mahayana is the “greater vehicle” because there is room within it for all; salvation or enlightenment is for all people. Followers of Mahayana refer to the earliest Buddhist writings used by Theravadins, but also use many other writings.

Vajrayana
“The Diamond Vehicle”
Vajrayana is similar to Mahayana, but also includes mystical and occultic elements from Tantrism, an ancient Indian tradition. The name derives from vajra, meaning something bright, transparent and indestructible, like a diamond, and referring to the purity of tantric spiritual power. Vajrayana uses mantra (chant), mudra (physical gesture) and mandala (meditation circle). It began in India in the first century a.d., then spread to Nepal, Tibet, China and Japan.

Lamaism
Lamaism is the form of Buddhism widely followed in Tibet. Lama was originally a word applied to a high spiritual leader but later came to mean a monk. Lamaistic Buddhism developed at the end of the seventh century a.d., as a blend of Vajrayana and the ancient Tibetan Bon religion. The Dalai Lama (“lama great as the ocean”) is the figurehead, while the Panchen Lama (“jewel of the scholars”) is the spiritual leader.

Zen
Zen Buddhism is popular and influential in Japan. Originally based on Mahayana, it was known as Ch’an and was introduced to China in the sixth century a.d., from where it spread into Japan in the twelfth century. Little importance is placed on concern with teaching, and greater importance on meditation, through which one is believed to reach enlightenment. Zen has left its mark on Japanese society, culture and customs.

Folk Buddhism
This is the dominant form of Buddhism in many parts of East Asia, particularly rural areas. Elements of Buddhism are mixed with local religions, usually animistic. This produces a spirit-based worldview and lifestyle based around rituals and superstition. In some areas there are beliefs in other deity figures such as Buddha’s mother, with temples dedicated to them. Folk Buddhists are often not aware of the difference between their beliefs and the dominant Buddhist traditions.