Food Prep Can be Hard When You’re a Missionary

When my husband Phil and I lived in North Thailand from 1962-1966 we had to order food like sugar, powdered milk, flour and margarine from Bangkok. These things were expensive. Also, many kinds of food we were used to were not available at all in Thailand.

Coming home from a long trek, often overnight, to our house, we’d be very sleepy, dirty and hungry. To fix a meal, Phil would need to start a charcoal fire in our little stove, put water on to boil, and then we’d have to wait 20-30 minutes for rice and meat to cook. Because we were so tired, we would often go to bed hungry. It was just too much work to fix a meal. 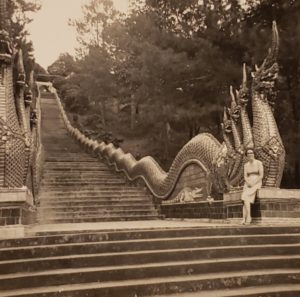 When we moved back to Seattle, we began sending food packages to our friends in Thailand. We’d include easy-to-fix things like instant oatmeal, ready-to-pop popcorn, pudding mixes, soup mixes, Jello, canned meat, Noodle-roni, powdered juice mix — anything easy and quick to fix. And we always included some hard candy.

At that time, General Mills introduced a powdered drink they called “Start.” It was a good way to start your day, they said. It had orange, grapefruit, and one other juice in it–similar to Tang. To introduce it, General Mills included sample packets in cereal boxes like Cheerios and Kix.

Phil and I knew the missionaries would love to have a powdered drink they could just mix with water, so I asked everyone at church to save the packets for us, and we included them in many of the packages we mailed.

Traveling by boat, these packages took anywhere from 2-5 months to get to our friends. I kept track of them. Sometimes the boat went to other countries first, and sometimes the boat just sat in Bangkok for a while. But each package — and we sent a lot of them — finally got to its destination, and we’d get a heart-felt “thank you” from the missionary family.

God Used Our Care Package for His Plans

Our friends Jim and Louise worked with a tribe called the Pwo Karen (pronounced poh-ka-wren). They welcomed the medical and agricultural help Jim and Louise provided, but the people made it very clear they wanted nothing to do with Jesus. It was very discouraging work.

The tribal villages of the Pwo Karen were way up in the mountains in northern Thailand. 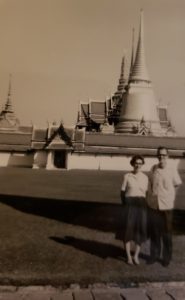 Jim and Louise lived in a tribal village and kept a Jeep in a friend’s house at the base of the mountain. Occasionally they would use the Jeep for a much needed break, or for some medical or dental help; they would trek down the mountain and drive the Jeep across the plain to Chiangmai, a fairly large city that had a hospital run by the Presbyterians.

There was also an OMF mission home in Chiangmai, where missionaries stayed while in the city.

One day a woman in the village of the Pwo Karen got very sick. It appeared she had a urinary tract infection and needed medical care. The men made a litter and carried her down the mountain; then Jim and Louise put her into their Jeep and drove her to the hospital in Chiangmai.

She was treated and was recovering from the infection. But there was a problem. The people in her village drank water from a spring, and the hospital’s water was chlorinated. As a result, she refused to drink. The staff tried coffee and tea, and she refused them, too.

The doctor told Jim and Louise that she couldn’t leave the hospital until she drank, so they could be sure her kidneys were working. But she couldn’t stay in the hospital forever. She was insisting that they take her back to her village; however, the doctor said she might die en route if she didn’t drink some water.

They Prayed for God to Intervene

Jim and Louise returned to the mission home. It was lunchtime and they asked the missionaries gathered there to pray for God to intervene. While they were eating, someone mentioned that a package had arrived for them that morning.

They took the package to their room and opened it. It was from us, and there in the box were packets of Start. They read the label and one of them said, “Let’s try it!” So back they went to the hospital. They mixed up a glass of Start and gave it to the woman. Her eyes opened wide and she said something like “Oh! This is good! Give me more!” So she drank several glasses of Start, her kidneys started working, and the doctor said she could go back to her village. This was the answer to the missionaries’ prayers!

We never heard whether this woman accepted Jesus, but about two years later, in answer to many additional prayers, the Spirit of God moved through the Pwo Karen villages and hundreds of them turned to Jesus! Jim and Louise spent the rest of their missionary career training leaders, translating Scriptures and hymns, and teaching the Pwo Karen how to live Christian lives.

“Who despises the day of small things?” What a mighty God we serve!

Our friend Jim went to be with the Lord in August, 2020, dying from COVID-19. At his funeral someone mentioned that he was no doubt welcomed by many of his Pwo Karen friends who had come to know Jesus through his ministry. I like to think that my husband was there, too, waiting to sit and talk with him about our time together in North Thailand and the marvelous wonders of a loving God.

Barbara Whitmarsh was born and raised in Seattle, WA.  She graduated from Seattle Pacific College and Prairie Bible Institute in Alberta, Canada. She met her husband Phil in OMF candidate school. They served 4 years with OMF in North Thailand. Since returning home, they co-chaired the missions committee at Shoreline Covenant Church (WA) for over 20 years. Barbara led an OMF prayer meeting for 30 years. Phil went to be with Jesus two years ago. They have 3 children: Susan, born in Thailand, Dan, a pastor, and Michael, adopted from Korea, and 4 grandchildren.