She said it very softly in an almost childlike murmur, “I’m not a good Christian.”

Our team sat on the tatami mats in the bright little meeting room in the church with a dozen middle-aged women who had gathered together on that day for fellowship and prayer.

We had been greeted warmly with ohaiyo gozaimasu, precious smiles, and Japanese tea and sweets. We were going around the large table, introducing ourselves through an OMF missionary acting as translator.

“My name is Y.* I was born on the island north of here. There was a church near my village and I met Jesus there, in that church, when I was twelve. But I am not a good Christian.”

It was a sentiment we would be met with often during our few weeks in Japan; of not being able to measure up. The “why” for this is wrapped up in the complexity of Japanese culture. For some, it may come from not having a full understanding of grace. For others, it stems from cultural norms that encourage people to express humility. 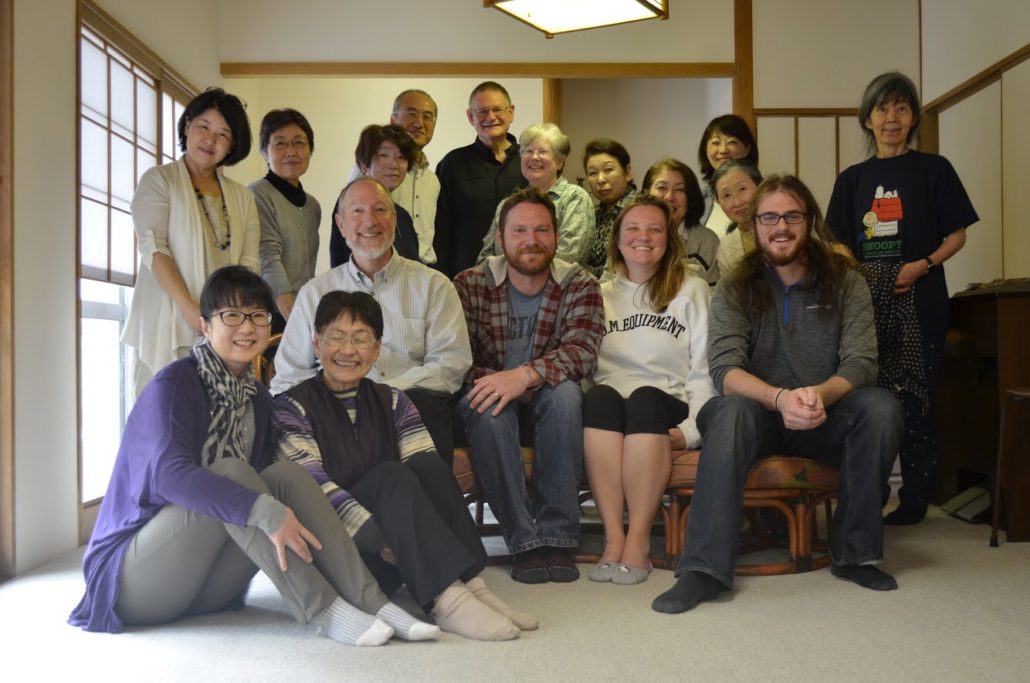 We began to share our hearts with each other, and I was deeply moved by the way these women shared their burdens and praises with one another. I too shared my heart and told them we had just started our 2-week prayer journey in Japan. Their eyes widened as I mentioned that we had a daughter back home. Then it was Mrs. Y’s turn to share. “I want to have a soft heart. I want to be able to forgive… I have been betrayed in the past and I want to trust again.”

“Let’s each pray for the sister next to us,” the woman acting as a translator suggested.

We went around the table and softly but fervently prayed for one another in our native tongues. Mrs. Y began to pray for me in Japanese. Her voice quavered, then cracked as she began to cry. My throat tightened and I swallowed hard to keep my own tears from falling as I listened to the emotion in her voice as she prayed for me.

In that moment, even though I couldn’t understand her, the inflection of her voice made it evident that she was a child of God; that she was talking to Jesus, whom she had met so long ago on the cold, remote island of her childhood.

“Amen!” We said it for one last time and then looked at each other, teary-eyed and smiling as we ended our time of prayer.

The lady who had acted as translator leaned over to me as we were getting ready to stand up. “Mrs. Y began crying when she was praying for your daughter. She was moved that you and your husband would come all this way to pray with us in Japan, leaving your daughter behind.” As I thought of my daughter, who was being well-taken care of by her grandparents on the other side of the globe, the Spirit prompted me to consider the separation that my heavenly Father, and his Son had experienced.

“Today salvation has come to this house,” Jesus told him. “Because he too is a son of Abraham. For the Son of Man has come to seek and save the lost.” – Luke 19:9-10

Jesus left his Father and came to intercede for us so that we might know Him and the fullness of His love and grace.

He asks us to follow Him, and more often than not, that involves a separation. For some, it can be a physical separation from loved ones.

For others, it’s a separation from the old self; the self that struggles to put down the burden of shame and instead pick up grace.

This moment among many others during our Serve Asia Prayer and Vision trip to Hokkaido confirmed God calling my husband and I to serve long term in Japan.

Our prayer is to be in Sapporo in November of 2020! Please pray for God to raise up financial and prayer partners so that our ministry in Japan may be fruitful.

Allison and her husband, Zac Nance, were appointed by OMF (U.S.) in November of 2018 to serve long-term in Japan, and are currently seeking partners who have also been given a heart to see the Japanese realize the love of Jesus. They live in Houston with their daughter, Kayla, and hope to be in Sapporo in nine more months to begin their four years in Japan. When she’s not writing, Allison enjoys cooking, sewing, and is passionate about creating events and gatherings where Gospel-centered community can grow and thrive. To learn more about Allison and Zac’s ministry to the Japanese, please visit https://partnerhub.omf.org/ZAN1