One of the strange things about being an Australian-born Chinese is that I find myself constantly living in tension between cultures. Over the years, I’ve noticed that there are usually three main types of Asians in Australia; and I’m not talking about the different ethnicities, but the way they identify.

While these lists can sometimes be humorous and often relatable, I can’t help but wonder if there is something deeper between our identity and our ability to love those who are culturally different from us; and ultimately, our willingness to be involved in cross-cultural mission.

There are three types of Asians. Firstly, there are those who are Aussie through and through. Their parents have probably lived in Australia for a long time (perhaps a few generations), so they were born here, grew up here, think like an Aussie, speak like an Aussie, and have lots of Aussie friends.

They might look Asian on the outside, but usually speak English at home, love Australian sports, prefer western foods, and there are many things about Asian culture that they don’t understand or identify with. Their idea of Asian food is often westernized dishes adapted for the local palette, and they would choose soft drinks or coffee over bubble tea any day.

On the other end of the spectrum, are recent migrants, international students, and those who went through Asian education or spent most of their developmental years in Asia. They speak their native language fluently and often shop in places where they can communicate in their native tongue, buy groceries, or eat at restaurants serving authentic dishes from their home country. Most would listen to music or watch TV shows from Asia and have the mindset or worldview of an Asian.

While they prefer to spend their time with other Asian friends who share their culture, tastes and interests, there are some who make lots of Aussie friends and integrate well into Australian life and culture.

Then there are those like me. Those who would call themselves first-generation Australian-born Asian; whether that be Chinese, Vietnamese, Cambodian, Indian, Malaysian, etc, or our families migrated to Australia when we were still quite young. We grew up here, went to school here, and we think and speak in English. We understand the social norms, we know how to fit in, but we continue to hold onto some of our parents’ culture.

Unless our families are from English-speaking Asian countries, we often spoke a different language at home (usually a mix of our parents’ native language with an Aussie accent and a few keywords in English), eat Asian food at home, and often find ourselves explaining Australian culture to our parents or Asian culture to our friends.

Of course, there are always exceptions to the rule (and by no means are any of my observations hard set rules!), so I would see this more like a spectrum.

But as I’m getting older and starting to journey with different people learning about or preparing for missions, I’m realizing the impact our self-awareness and identity have on our willingness to be involved in missions.

Melbourne, Australia is a fairly multicultural city compared to most parts of the world, and even as I go out to buy my groceries, I’m often approached by people from different Asian backgrounds to ask for help or directions. They look at me and start speaking in Mandarin, Japanese, or Korean, only for me to stare back at them blankly.

This ‘neither here nor there’ reality is magnified when I find myself traveling. When people ask me where I’m from, the answer, ‘Australia’, is usually received with surprise or confusion; ‘…original?’.

Even though I have an Asian face and build, I dress differently, don’t speak the language or with the right accent, and I carry myself and walk differently. At a glance, I might blend in with the crowd, but over the years, I’ve realized that locals can immediately tell that I’m not from around here.

While this awareness in how we think, act, dress and say can come across to someone from another culture is crucial in effectively contextualizing the gospel, we must not allow it to separate us.

Finding Unity in the Body of Christ

One of the biggest challenges I’ve discovered as an Asian Australian is the idea of an ‘us and them’ mentality.

Growing up, I was very aware that there was a distinct difference between the three groups of Asians I mentioned. It’s hard to admit, but some of us might have thought that we were better than another group, while some of us thought that another group looked down on us.

Whether we believed it or not, we all learned subtle racism while trying to fit in with those we identified with.

The implications of this became apparent in the people we decided unfit for dating, seeing differences in how we do things as annoying rather than simply different, or making fun of others who might be embracing pop culture from different countries.

Our Identity Is in Christ

No matter where we come from and who we identify as we need to be aware of the barriers we’ve subconsciously put up and look deep in our hearts to discover what is truly ruling our identity.

Unless we find our identity in Christ and put down our cultural pride or insecurities of not wanting to stand out, it would be naïve to think that we could genuinely love – like Christ – someone, let alone nations of people, who are so different from us.

There is neither Asian, nor Western, neither English speaking nor Chinese speaking, nor is there better or worse, for you are all carriers of the image of God, made one in Christ Jesus; Children of God, through faith. 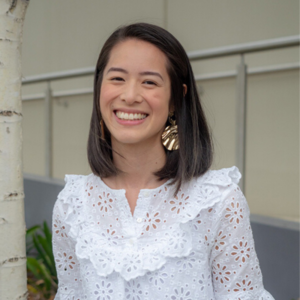 Sheron Wong is the Global & Ministry Systems Director at Clayton Church of Christ in Melbourne, Australia. Graduating from Tabor Victoria in 2013 with a Bachelor of Theology in Mission Studies, she spent six years serving with OMF Australia before moving into her role in church ministry. In her free time, Sheron likes to try new recipes, bake with sourdough, look after her indoor places or take a good long nap!