To say Sochea’s childhood was tough would be a massive understatement. His father died when he was a baby, and his mother passed away in his teens. His uncle, a local pastor, became his caretaker. But two years later, Sochea’s uncle was murdered for his faith in Christ.

The brokenness Sochea experienced in childhood is, unfortunately, not unique to him.

Younger generations have inherited a legacy of trauma in Cambodia, as many are being raised by genocide survivors who suffered under Pol Pot in the late 1970s. The scars of the past often manifest in relational issues, addictions, and absent father figures. As one of the poorest Southeast Asian countries, Cambodia has an under-resourced healthcare system. It struggles to respond to the nation’s enormous mental health needs.

And yet, God is using Cambodians like Sochea to set the country on a path to hope and healing.

Interview with Sochea by Megan Sarian 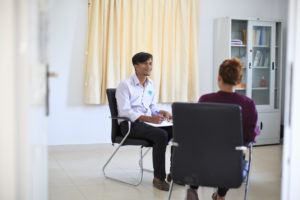 Sochea met Christ as a young child, but losing his mother sent him into a deep depression. Then one day, Sochea felt God’s reassurance and comfort in a powerful way. Strengthened by the Lord’s promises, Sochea asked God to help him serve others.

God answered Sochea’s prayer by introducing him to Christian workers who walked with him in faith. One worker was OMF missionary Mary Haag. As Sochea began helping her translate a counseling course into Khmer, he felt drawn to pursuing counseling himself.

Now, 10 years later, Sochea is working alongside OMF and others to raise up the first generation of Christian counselors in Cambodia.

Sochea is passionate about seeing God heal his nation. He believes that helping the church care for people’s emotional needs is one way he can play a part in that healing work.

I sat down with Sochea to ask him about the need for counseling in Cambodia. He shared with me his hopes and dreams, and the challenges he faces.

In Cambodian culture, what’s the general attitude toward counseling?

People think that if you go to a counselor, you must be crazy. As in, if you need counseling, there must be something wrong with you. People will even joke about it. So people generally have a negative impression of counseling.

Or, people assume that meeting with a medical doctor and explaining their symptoms counts as counseling. They think all they need is some medication. But they don’t understand that medication doesn’t fix everything. Often times there’s also an emotional issue that needs to be addressed.

On top of all that, counseling is expensive. People don’t want to “waste” money on something they view as simply sitting in a room and talking to someone. The cost isn’t worth it to most people.

How do you think that attitude will change?

I think it will just take time. When I started working at Mercy Medical Center (a Christian hospital that provides high-quality care for low-income Cambodians), even the staff didn’t understand the purpose of counseling. But then I started offering my services to the staff. Nurses and doctors began coming to me and sharing their anxieties.

I also wrote down stories of how people’s lives were changing. Some people forget that God is at work. But the stories helped show the impact. Now, Mercy Medical Center employs two counselors and the director and staff see the importance of having skilled counselors available.

You said counseling isn’t affordable for most people. What’s the solution to that problem?

At Mercy Medical Center, we offer counseling services for just $7.50/hour. This is affordable for some people. But for those who can’t pay, OMF and others help cover some of the costs for these services.

Learn more about how you contribute to counseling services for Cambodians by visiting this project.

What are some common struggles you see among your Cambodian clients? Are any of these problems related to the country’s history of war?

A lot of Cambodians struggle with relational problems. People don’t know how to express their feelings or regulate them. So they often resort to yelling at each other and sometimes hit their children. Families face issues with fighting, divorce, aggression, drinking, smoking and gambling.

I can’t say for sure that these issues are connected to the war. But I’d imagine that the fear people experienced after the genocide contributed to the anxiety, worry and depression I’ve seen.

Do you have any stories of people whose lives were changed through counseling?

There was a guy who was a leader in a large church in Phnom Penh. He had a panic disorder and sought treatment from hospitals, but nothing helped him. He struggled to attend church and became angry toward his family.

When he came to Mercy Medical Center (MMC), he was referred to me for counseling first. In our first session, we talked about his abusive father and his childhood. We also talked about another traumatic event that had happened in his life. I helped him become aware of his emotions and taught him breathing exercises. After his third session, he was seeing a lot of improvement in his life. Communication with his wife and children got better. After just four sessions, he was able to return to church, play music in the worship band and invest in friendships again.

How does counseling go hand in hand with church planting?

Mercy Medical Center has a church planting team that goes into villages to share the gospel. They try to identify potential leaders in the community and invest in them. Some people they identify may have potential, but they also have psychological needs. Maybe their children struggle with behavior problems, or that person has an issue with a spouse. We send out a counselor to meet with them, or invite them to meet with someone at MMC.

For example, in one village, a church leader had lost her husband and she didn’t know how to cope with her grief. She struggled to lead the church during that time. So we sent a counselor to sit with her and talk. After 10 sessions, she is doing well and leading the church again.

Sochea empowers the next generation

Sochea stands at the front of the room and counts to five on his fingers. Then he encourages the participants to breathe out slowly. He’s teaching relaxation techniques at a Christian counseling training course in Phnom Penh.

Though God’s healing work in Cambodia may be difficult to quantify, the participants in the room provide powerful evidence of the Spirit’s movement.

Some participants are church leaders, others are non-profit workers. There’s even a medical professional in attendance. Many bear their own scars. But they’re putting in the work to heal, and extend God’s hope to others.

Praise God for his work in Sochea’s life, and for other Cambodian Christians with a passion for mental health. Pray for an increase in mental health advocacy and resources within the Cambodian church. 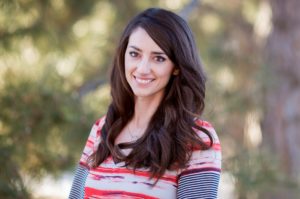 Megan worked in communications for almost 10 years. She served as Content Manager for OMF (U.S.) until moving to Cambodia to join the team there. She enjoys writing, editing and over-thinking everything word-related. Megan spends her spare time cycling, thrift shopping, exploring her city and drinking coffee with (or without) friends.