This year the Jesus Village Church in Phnom Penh celebrates its 20th anniversary. Read how this church has transformed lives and whole communities.

In the 1990s, an eclectic group of new OMF workers from Malaysia, the U.K., South Korea, Australia and the Netherlends stepped foot in Cambodia just as it opened its doors to outsiders. The workers used their backgrounds as teachers of English, music, dentistry, Taekwando and the Bible to reach out to students and neighbors in the Calmette area of the capital, where most of them lived.
They started with Bible study groups and children’s ministry in homes, then started formal Sunday worship in February 1998, meeting on rented premises and becoming known as Calmette Church. 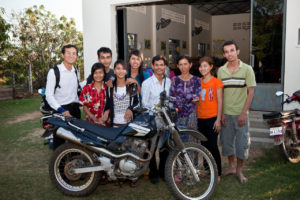 The earliest believers were teenagers who were full of enthusiasm to bring the gospel of Jesus Christ to others. On Sunday afternoons and mid-week outreaches, they went with the missionaries to conduct children’s ministry, visit homes and share in house groups.
As many as four people would ride on the church’s old motorbike to do outreach. Once when it flooded they took a boat instead to ensure the outreach could continue. On another occasion they were chased away by a villager with a machete for preaching the gospel (they ran for their lives while managing to save the motorbike and their guitar). They were fearless and were on fire to shine Jesus’ light everywhere. The changed lives of these young people led several of their parents to the Lord.

A new name for a notorious village

As the members and ministries grew, the church started looking for somewhere to build their own meeting place. In 2005, they bought land 1.5 miles away in Toul Sang Kei and completed the building work in 2007.
While Calmette Church took the name of the area in which it was located, the leaders did not want to change the name to Toul Sang Kei Church. Toul Sang Kei village was one of the most dangerous areas of Phnom Penh, notorious for prostitution, drug dealing, and all kinds of criminality.
The church leaders decided to use the name Jesus Village instead, trusting that Jesus would bring transformation to the area. A plaque was placed on the third story of the building with the words “JESUS VILLAGE” for ease of locating the church.

At first, the village head demanded the church remove the plaque because the village already had a name. However, over the years, through perseverance in prayer, loving people, building relationships, and their living witness, Jesus Village Church (JVC) still stands and continues to reach out to the community and beyond. 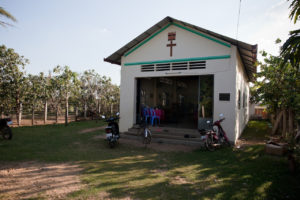 A church plant of JVC on the outskirts of Phnom Penh.

When asked where they live, the neighbors now answer, “I live at Jesus Village,” and JVC has become a landmark of the village. The community has also become a relatively safe place to stay and is no longer avoided.
On Sundays, strollers belonging to those first young believers line the back of the church while their parents find their seats at the front. Today JVC’s ministries include hostels for university students, church plants and outreaches in nine locations, two preschools, and groups for children, youth, university students and adults. Praise God for how he has worked through JVC in the last 20 years.

Will you pray for Cambodia?