Abandoned Then Injured in a Fire

Ken is a 10-year-old boy from a rural family in East Asia. When Ken was younger, he was left in the care of his father, who didn’t have any extended family in the area.

One day while playing on a hill near his home, Ken was severely injured by a fire that left 90 percent of his body burned. He was in a coma for 10 days.

By a professor of Prosthetics and Orthodontics in East Asia

When my co-workers met Ken, his 10 fingers had all been burned off. There were large skin grafts on his torso and legs. He had been lying in bed for three months. After eight months in the hospital, Ken’s father had used up all his money, so they had no choice but to return Ken to his home. At that time, Ken could only manage a few steps.

How could he go to school or continue on with life like any other kid? Since his father didn’t think schooling was very important, Ken stayed home and did nothing.

By God’s grace, a short-term overseas medical team arrived in a neighboring city. We were able to have Ken seen by the team and introduce him to the local Christian community.

During my time in the US, I started looking into the possibility of making a pair of hand prostheses for Ken using the new 3D printing technology. Praise the Lord, I found free access to 3D printers at my local library!

The teens at my church’s youth group were excited to get involved. They helped to assemble the handpieces 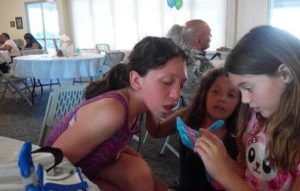 There are still some technical flaws with Ken’s hand design, but I hope to have the university rehabilitation students I teach work on designing a better prosthesis.

Ken still has a long way to go. He will need continual surgery to treat his burns and rehabilitation to recover physical mobility, but with the help of local brothers and sisters participating in the care of the family, we can see God’s love and care for Ken.

God works with compassion and creativity in ways we may not expect.