Feeble Efforts before a Faithful God 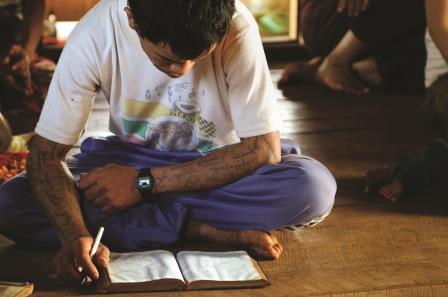 Article featured in 2014 East Asia Insight Q2
A story of lives transformed in Myanmar.
After a “honeymoon” period in Myanmar, her new ministry home, Trisha found her rose-colored glasses fogging up. “Why is it so hard to simply find toilet paper in this hotel?” she asked herself. She rummaged through a storage closet and emerged victorious with a toilet paper stash. The hotel staff, unfortunately, took offense to her boldness. In their eyes, she had labeled them “incompetent”—not quite the message this Christ-follower wanted to send to those God had sent her to love.
Even through misunderstandings, visa troubles, job rejections and language learning frustrations, Trisha and her teammate, Cassie, knew that God could work through their feeble efforts. The Burmese people, after all, needed to hear of the God who loved them.
Cities in Myanmar frequently pulsate with Buddhist scripture recitations, read through a megaphone from a temple roof for seven to nine days at a time. Trisha and Cassie counted more than 20 monasteries within a three-block radius from their home. A Buddhist water-throwing festival called Thingyan envelops the city for up to five days in April. Young people sprinkle water on the elderly to earn merit, while the elderly increase their chances of a beneficial incarnation. Under the guise of festival tradition, people indulge in food, alcohol, sex and crime.
Trisha felt the urgency of sharing hope with a lost people. Nine months into their stay, Trisha and her teammate threw a Christmas party for their new Burmese friends, complete with caroling, decorated sugar cookies and readings of the Christmas story in both English and Burmese. Thirty-five people flooded their home. An invitation was offered at the close of the night: “If you would like to know more about Jesus or the scriptures, please let us know.”
It was a step of faith. Two foreign women were offering to teach both male and female Burmese friends about Jesus, despite their inability to discuss spiritual matters in the Burmese language. God provided both the courage to extend the invitation and the people to attend. Eleven people expressed interest and a Bible study started in their home the following Sunday.
Thus began the trial-and-error period, both for the Burmese attendees and the Christian workers. Numbers fluctuated. Some wanted private lessons. Trisha and her co-worker began incorporating more Burmese into the teaching and worship times. Trisha learned spiritual terms in Burmese, but those with Buddhist backgrounds did not understand the meanings. “Lord, who can teach me how to communicate with those from a Buddhist background?” Trisha asked.
Three months later, Joe, a Burmese man from the Bible study, invited Trisha to relocate the Bible study from her small, hot house to his spacious, air-conditioned English school, which was closer to the Burmese people. Trisha accepted the invitation gladly.
As group members grew in faith, the spiritual battle increased. The English school caught fire and burned to the ground. Joe was one of the new believers. “Would he lose his faith?” Trisha wondered. “Could he continue trusting God?”
God, yet again, provided faith and a way forward. Joe not only grew in faith, but he strategized ways to include Bible stories in his English-teaching program to share truth with his students. Joe’s home became the new site for both the English school and the Bible study.
Trisha stepped back in amazement at the God who was taking two foreign women and a charred English school and doing bigger things than she could have imagined. A Burmese evangelist stepped in to disciple three committed men from the Bible study. Gradually, the evangelist also led the weekend Bible study with little oversight from Trisha and her teammate. Joe’s sister came to Christ and the Bible study’s growth exploded. During this season, Trisha found the teacher she had been praying for: a pastor from Myanmar who could teach her how to share the gospel with Buddhist people.
God’s movement was evident, but Trisha would soon be moving away. What would happen to the new believers? Who would oversee their growth? Trisha’s English teacher happened to pastor a multiplying house-church movement and offered to bring the new believers into one of his church plants for deeper discipleship. About one week after Trisha moved, six new believers, including Joe, received baptism through the church. To this day, the house church grows and continually sees new people coming to know the Lord.
In the midst of strongholds, long-practiced family idolatry and powers of darkness that hover over these places, the power of God is greater, and he uses our weakest attempts to expand his kingdom.