Dorothy Mainhood: “I am grateful for the gift of ‘Home’ in many places.”

“I believe that He wishes me to be one of His laborers.”

“Having received Christ as a young child, Dorothy turned away from Him in her teenage years. But as a student nurse, she realized her need for Christ and was restored in fellowship with Him. Soon after that, she realized that He wanted His message of grace to be made known throughout the world, so Dorothy committed her life to missionary service at the age of 18.”

Those words were included in Dorothy Mainhood’s newsletter in 1996. At that point, she was working with OMF as a missionary to Thailand. Her life had changed dramatically because of that commitment at 18.

On February 26, 2022, at 90 years of age, Dorothy went home to be with her Lord. OMF (U.S.) Retiree Care Coordinator, Pam Kaczmarczyk, shares Dorothy’s journey of service.

In a letter to the OMF Candidate Secretary at 25 years old in 1956, Dorothy wrote,

“As a first-year student nurse, I began to realize the powerfulness of sin grasping my life and my powerlessness against it. I am sure that it was in answer to my sister Beth’s prayer for me that I went to her after a morning church service and asked her to help me. She took me to the Pastor’s study and he showed me Romans 10:9-10 (‘That if you confess with your mouth Jesus as Lord, and believe in your heart that God raised Him from the dead, you will be saved; for with the heart a person believes, resulting in righteousness, and with the mouth he confesses, resulting in salvation.’) As I believed with my heart, the burden of sin was lifted. Just yesterday the Lord made Isaiah 38:17 very precious to me because it explains what happened then: ‘Behold, for peace, I had great bitterness: but Thou hast in love to my soul delivered it from the pit of corruption: for Thou has cast all my sins behind my back.’”

“Because of the love which Jesus Christ has given me for Himself, and because as Lord of the Harvest, I believe that He wishes me to be one of His laborers, and share His concern for those who need to know Him… Three months after first receiving Christ, I heard a missionary challenge for the first time, and was sure I should begin preparation to go to those whose opportunity to hear is so much less….”

Dorothy spent some time preparing herself from 1949 to 56 with an RN degree as well as a B. Sc. at Wheaton. She got her MA in Linguistics from Hartford Seminary Foundation and attended the SIL (Summer Institute of Linguistics) after her first term in Thailand. In 1987, she got her MA in Intercultural Studies from Wheaton. Many Home Assignments after that Dorothy was either studying or teaching! 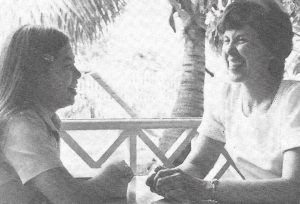 Dorothy’s first two terms in Thailand were very happy at Manorom Christian Hospital as a nurse. Her language skills were so excellent that she was asked to be involved in the language school for missionaries where she served for 35 years.  Alongside this ministry, she was passionately involved in a discipling ministry with Thai girls through her local church. As her niece commented in her excellent overview of Dorothy’s ministry, “Dorothy always tried to fit into the Thai culture. Those gals adored her.”

In 1979 David Pickard wrote, “Dorothy is an excellent missionary. She continues to have high standards for the language program and for her personal life and in her outside ministry to the Dowkhanong Church. She can easily overstretch herself being a willing and enthusiastic person…”

In April 1988, Dorothy wrote to the Bangkok Superintendent and Field Council members, “May I ask for a fresh look at my designation and job description?” At this time Dorothy had taken classes at Wheaton and became acutely aware that “we are coming into a new chapter.” She felt it was time to emphasize that Thai Christians need to contextualize the gospel more for themselves. She wrote 11 pages describing in detail many ways to implement the things she had learned in her studies and how to apply that in the Thai context. She was very passionate about sharing her new knowledge.

In her January 1996 Prayer letter, Dorothy wrote about it being her last full-time missionary year in Thailand, making it a total of 40 years. She wrote at that time about her joys of being able to give gifts and receive gifts, of people growing in the Lord, and more translation done on the “cross-cultural training book.” Then she wrote, “Actually, the gift that tops all of these is that of sensing the Lord Jesus’ gracious presence every day, being cheered and uplifted through some knotty problems along with the joys. Thank you so much for your part through prayer.”

In 2006, at the age of 75 years, Dorothy went back to Thailand to teach at Phayao Bible College in Thailand for a school year – teaching English and Hermeneutics, (a new class for her). On that same trip, she was also asked to fill in 5 months for the Language Supervisor who was on HA. She speaks of this as another opportunity to “trust God with all my might” by asking for prayer! 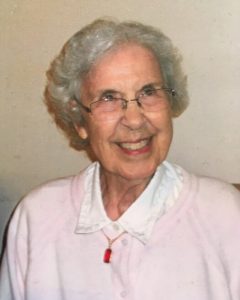 In her May 2006 prayer letter, she stated, “I am grateful for the gift of ‘Home’ in many places, and for the opportunity to share Him on both sides of the world. In Thailand, I can continue to share Christ with UAB Alumni who I knew in Birmingham, who are now professors in Universities in Bangkok, as well as visit my closest Thai friends and see how God blesses and uses them now. Thank you again for your part in prayer for their growth and service for Jesus, the former coming closer to Him, the latter busy building His church in Thailand. May He be greatly glorified.”

Dorothy spent her last 10 years in Greensboro, NC where she was a blessing to her family and church community there. Her wonderful sister, Mary, reported that on February 26, 2022, Dorothy went to her eternal home, just short of her 91st birthday.

No superfluous glitter in this summary! Just facts! Her Thai name meant “Gracious”, and she was.