Prior to my Serve Asia trip, I was a full-time student at Biola a Christian University. Majoring in Intercultural Studies, I was required to complete a cross-cultural internship.

In the spring of 2019, I was introduced to Serve Asia, OMF’s short term overseas ministry program. Denny and Debbie Merritt, the Southern California OMF Reps, came into our university class to share about different short-term mission opportunities for the coming summer.

There was a need for a female intern in Hirosaki, a rural city in northern Japan. At the time, nothing scared me more than the words, ‘internship in Japan.’ I had previously been on a ten-day soccer ministry trip to Japan and had one of the worst experiences.

I had always attributed my poor experience to the country and culture. When I decided to contact Debbie and Denny to hear a little more about this internship I didn’t realize God was about to change my perspective.

There is no explanation for why I decided to reach out besides the Holy Spirit’s prompting. Within the next ten days, I would inquire, apply, and be accepted as an intern at OMF’s church plant in Hirosaki, Japan. It was one of the quickest processes I’ve ever gone through, which also terrified me. I doubted my decisions every step of the way.

All I knew was that the small step of faith I took to reach out to Debbie and Denny in the very beginning would lead to something much greater that God was doing.

God Was Leading Me

I had not enjoyed my previous time in Japan, and I had a great desire to go to other places. Nonetheless, there was something small that made me take each step the whole way until I landed in Japan.

I wasn’t prepared for what God had planned for me. My 10 weeks in Japan were nothing short of life-changing and life-breathing. It’s difficult for me to put into words how deeply and radically I experienced the Holy Spirit working in and through me in Japan.

Every week my ministry partner, Anna, and I would travel by train to a kindergarten to teach English to a teacher, Miss K.

Our English classes with Miss K. were structured to be 45 minutes of English instruction and then 15 minutes of a Bible story, a testimony or what the Lord placed on our hearts. Over the course of our 10 weeks, Anna and I became fairly close with our English student and progressively felt prompted to share the Gospel with her.

The first time we shared from the Bible, Miss K. had countless questions. She had never seen or heard of the Bible or of Jesus.

Japan’s population is less than 1% Christian. While I was very aware of these numbers, this was the first time I realized people are more than a statistic. It hit me like a bus. Our English classes quickly turned into an hour of discussion about the Gospel. Miss K.’s desire to learn more about God and the Bible was inspiring. She had a genuine curiosity that fueled our discussions. At the end of our ten weeks, we gave her a Japanese Bible, the first she had ever owned. 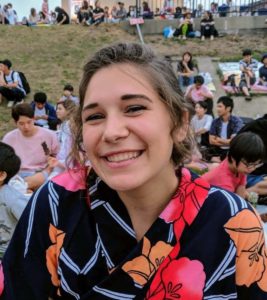 Although this is just a small glimpse into the work I was privileged to be a part of this past summer, it is a good indication of how powerfully God worked in my own life during my short-term mission trip in Japan. I grew to love Japan, both its culture and people. I could see God’s hand intricately working through the missionaries there and how God is calling an entire country to Him. I worked alongside Christians from across the world and was able to do ministry beside them.

It gave me a glimpse into what heaven will look like when every tribe, tongue, and nation will worship God together. My 10 weeks in Hirosaki, Japan not only grew my ministry abilities but more importantly, allowed God to work in my heart a love and an ache for the people of Japan to know Jesus.

Coming back to school following my time in Japan, I was motivated to learn more about Japanese culture and the needs of the country. I was even able to write my senior capstone paper on mental illness in Japan and the ways in which the Gospel can be used to combat it. While I am unsure of where God is taking me, I pray every day that I will be able to impact the Japanese people for our Lord Jesus Christ.