“Devote yourselves to prayer, being watchful and thankful,” (Colossians 4:2).

Join in prayer for thousands of believers living throughout certain regions of East Asia. May God equip them to live for Christ. In some areas, believers have potential for great outreach within their nation. Mission researchers project that over 3,000 additional cross-cultural workers are needed for groundbreaking ministry, pioneering among East Asia’s unreached people groups.

The Baima make their home among majestic mountain ranges at the eastern fringe of the Tibetan Plateau. From time immemorial, the 15,000 Baima people have been animists, revering a local mountain as their ancestor and god-protector. Pray that God would show himself to be Lord over all the earth. Pray that God will raise up people who intercede for the unreached Baima.

The Hani practice ethnic religions. Most of their villages have temples where a multitude of gods are worshipped. These gods are associated with the earth, water, fire and famous ancestors. There are a small number of Christians in China and Vietnam. There are no Christians among the Hani in neighboring areas.  Please pray that the Hani will come to know the Lord of creation who made the earth, water and fire.

Pray that awareness of Rohingya communities in the United States would spread among scores of American churches. Ask God to give American believers a desire and boldness to build relationship with their Rohingya neighbors and reflect the love of Jesus Christ. Pray for Rohingya believers with a heart to serve their people.

COVID-19 has restricted plans for missionary travel and ministry deployment. Praise God for new workers starting an online orientation course and language study while still living in the U.S. Pray for Mark and Rebecca (to Thailand) and Candace (to Japan). Two families are planning for creative access ministry with unreached people groups. Pray for these couples, both D & L and D & E. Thank God for providing clear guidance as new workers press forward in ministry.

Praise God for his people throughout the multi-faceted regions of East Asia. In many areas, believers are strong in their faith and tested through suffering. May they be equipped to shine for Christ among the unreached regions yet to learn of Christ. Thank God for intercessory ministries that encourage believers to pray. 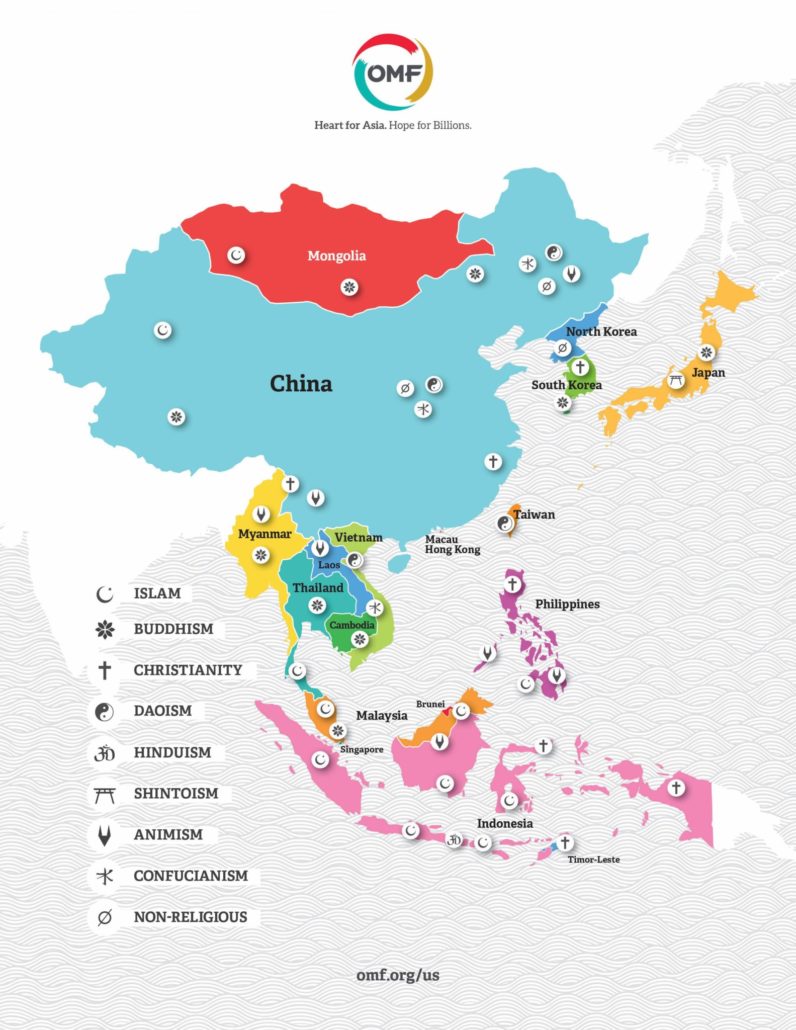 Praying where the need is greatest

“The wonderful thing about praying is that you leave a world of not being able to do something, and enter God’s realm where everything is possible. He specializes in the impossible. Nothing is too great for his almighty power. Nothing is too small for his love.” (Corrie ten Boom)

Looking at the spiritual needs of East Asia, there is much for which to praise God in growing thousands of churches—in remote villages and huge cities. A brief comparison of nations clearly illustrates where the need for additional workers is most critical.

Mission researchers carefully monitor and update assessments of where additional cross-cultural church planters face the greatest challenges. Pray for millions of people who have not yet met a Christian, nor seen a portion of scripture. They have not yet heard a gospel radio program, nor have they been invited to an evangelical church.

Ask God to raise up hundreds of mobilizers who will advocate for the unreached. Ask God to stir believers to greater depths of prayer, stewardship and service.