When you walk into the Black church house in the US you will get a theology of hope. One that has been forged in the crucible of suffering and a longing for God’s justice.

When I think of my testimony in terms of context, I think back to my first lesson in theology from my grandmother.

My grandmother lived in Beaumont, Texas for a long time by herself. When she was younger, grandmother walked door to door selling insurance. But both grandmother and her neighborhood were aging, and the neighborhood struggled increasingly with crime and poverty.

My mom and my aunt tried to convince grandmother to leave and move in with them. With each rejection, they added more protective measures to grandmother’s house—burglar bars and alarm systems— the house having suffered multiple burglaries.

I remember sitting at grandmother’s house one day, turning to her to ask, “Grandmother, aren’t you afraid, living in this house by yourself, ‘cause you know you had a few break-ins?” Grandmother looked with knowing eyes and replied, “No baby, I’m not afraid because I don’t live here by myself. I live here with three other men.”

After just enough time for me to gasp and look with confused horror, grandmother continued, “Baby, I live here with the Father, the Son and the Holy Spirit. They take care of me, and so I have nothing to fear.”

That was my first theology lesson about the triune God, rooted deep within the context of the physical realities of life with my family. 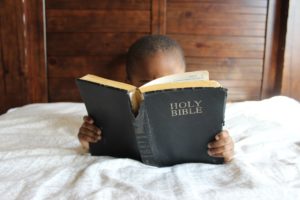 My spiritual heritage was born in the context of watching life happen in my family and in our cultural community. Looking back, watching grandmother living in hard situations with hope and with joy, standing in the love of Christ no matter how challenging the circumstances, left an indelible mark on me. It would bear fruit as I journeyed with the Lord and each observed experience became a thread the Lord was weaving in the tapestry of my story.

The Weight of Glory in Each of Our Stories

All of us, as followers of Christ, have been given a story. This is no normal story; but ours is a story upheld by two remarkable and grace-filled truths.

Second, Jesus prayed for His disciples to have His glory, a prayer meant for every disciple, that they would be His glory bearer no matter their station in life.

In short, your story carries the weight of glory, all to prepare you to be sent into the world, as Jesus was sent, as a witness to the truth (John 14-17).

As God pours His revelation into us, we express this interaction with the divine through the construct of who we are, experiential/social context and all. That expression is what I mean by our story. We bear witness to the work of God the Father and His Son the Lord Jesus Christ. Our stories are God revealing Himself to us and through us that the nations would hear and see the testimony of Christ through His people. Glory bearers bearing witness to His glory.

This means that each individual, each family, each culture, gives nuance to the understanding of God’s story as it is revealed through their person, through their context. As such, our stories are meant to be expressed in community, a shared articulation of the reality of God, in such a way that we see a fuller revelation of the character of God in community than we do if we are by ourselves. We mustn’t forget, this is by design (e.g. Rom 12:4-5; Eph 4:15-16)!

Hearing each other’s stories is indeed a way in which we see Jesus more clearly.

With this in mind I would suggest, as witnesses of God’s character in His glory, we all have a theological contribution to make to the body of Christ. That theology is shaped by our stories. It’s in what Christ has done in us, through us, for us. Theology formed from a global perspective (or community) means that we as His people need each other to be His complete body (e.g. 1 Cor 12-13). When we are lacking each other’s stories we have an incomplete theology.

I believe this is the opportunity we face at this particular point in the history of the Church on mission with Jesus. We might suggest we have seen an incomplete theology in our missionary efforts because we have lacked key voices in our theological process.

While it might be a healthy exercise to explain these absences, I can say I have come from a tradition that is greatly underrepresented in global missions, the Black American church. I can also say, while serving in East Asia as a missionary, that I have seen places where my cultural tradition’s voice could have played a unique and helpful role in our team’s endeavors.

The Black Church Has a Theology of Hope

For instance, if we’re talking about the unique voice of the black church and her potential theological contribution to missions, we’ve got to talk about, amongst other things, justice, suffering and hope.

I can tell you beyond a shadow of a doubt, when you walk into the Black church house in the US you will get a theology of hope. One that has been forged in the crucible of suffering and a longing for God’s justice.

This theological flavor is needed around the world.

It is also a unique expression that is absent on the mission field, because those that carry that story are themselves largely absent from the field. Consider the following reflection.

My Story Impacts Who I am as a Missionary

While growing up it was common to hear older aunties share their stories of how the Lord provided for electricity bills, rent or more.

They had little to make ends meet, but never let their circumstances rob them of their God given dignity. They walked through hard times knowing they remained God’s children and that He would see them through it all.

And then there were stories from my father, who worked in a company that had many who made it clear they didn’t want my father as a coworker (particularly at the beginning). There were threats and attempts to undo my father, but his life verse, Psalm 121, would always seem to be lived out in the hope of God’s care and glory. My dad told me as years went by, he and his friends formed something of a hotline. If the day presented challenges that were too much, they would call each other and head out to walk and pray together, waiting together on the Lord’s strength to face challenges, injustice and evil with God’s grace.

That was my testimony. Seeing my family stand in their identity in Christ even when much of the world around them sought to rob them of that identity and plunder their dignity by debasing the image of God in them.

The Suffering Dark Child of Thailand

You see in Thailand, often times dark skinned children are seen as outwardly marked with their skin for having bad karma. They are assumed and treated as the dumb one, the lower class one, the one who will suffer a lower life because of their past faults and “sin” in the Karmic cycle. And this is their reality, juxtaposed to that of the light skinned child.

When I have met this child at a school activity, in the community, or in a grown man or woman suffering from years of a false identity, there was a connection over shared story that is felt down to my core.

Did I need to take care not to define this connection solely by my culture and experience? You bet! But it was a starting point that allowed us to begin to walk together as one story connected to another, giving us the opportunity to hear THE story, together.

Now, just like that, I have a part in creating an environment for a more whole theology in Thailand. Suffering is a big thing in Thailand and I have a theology of suffering that the Lord has given me as a person.

My story is given by the Lord to me to share with brothers and sisters in Thailand. Because he meets people where they are, that they too may be given a story of God’s glory.

Will Brooks is from Lake Jackson, Texas. In 1999 Will journeyed to Thailand to serve with OMF, where he met his wife Meng En who had come from Taiwan to serve with OMF as well. After completing studies at Dallas Seminary, Will and Meng En returned to Thailand with OMF as a family. They were then blessed with their daughter, Hadassah, who was born while they served in Thailand. Together the Brooks engage in church planting ministry in the Central Region of Thailand. Their ministry includes soccer outreach, disciple-making and church planting training, home school, and more!