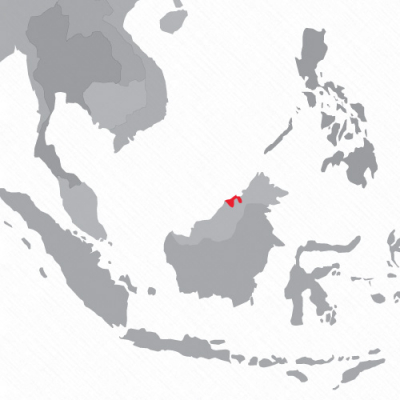 Brunei Darussalam means “Brunei abode of peace.” It is a tiny nation of some 5,270 square kilometers, wedged between the East Malaysian states of Sabah and Sarawak on the northwest coast of the island of Borneo.

The Brunei Malays are part of a larger population of more than 25 million Malay people found across Southeast Asia, in Peninsular Malaysia, South Thailand, Sumatra, Borneo and Singapore.

Brunei’s official language is Malay, although English is widely used for commerce. Dialects of the Chinese and Indian populations and of indigenous ethnic groups in the interior are also spoken.

Brunei has a humid, tropical climate, with daily temperatures of 80-95°F (27-35°C). The monsoon season comes between November and March. Brunei is not troubled by earthquakes or typhoons and generally not by industrial haze.

Brunei’s recorded history begins with the Sultanate of Brunei in the 14th century. However, historical references in Chinese and Hindu chronicles refer to an earlier trading kingdom situated at the mouth of the Brunei River.

The first sultan, Alak Betatar, embraced Islam and changed his name and title to Sultan Muhammad Shah. He ruled from 1363-1402. Over the next 200 years Brunei’s power and influence increased, controlling all of Borneo and parts of the southern Philippines.

During the 17th and 18th centuries Brunei’s influence waned as European colonial power increased in Asia. In 1839 the English adventurer and former soldier James Brooke helped the Sultan of Brunei to put down a rebellion. As a reward he was made Rajah and Governor of Brunei (later known as the “White Rajah”). Brunei lost territory during his time in office.

In 1888 Brunei became a British protectorate and in 1946 Sarawak was ceded to the British government as a crown colony. Brunei became a self-governing state in 1959 and the fully independent state of Brunei Darussalam in 1984.

Oil was discovered in 1929 in Seria, on the northwestern coast, and the kingdom’s economic rise began. The 28th sultan, Sultan Omar Ali Saifuddien, led Brunei towards prosperity and modernity during his rule from 1950-1967. His son, Hassanal Bolkiah, is the present sultan.

The sultan is absolute monarch, serving as head of the government, prime minister, minister of home affairs, commander and chief of the armed forces and head of Islam in Brunei. He is widely respected by the people.

While there are no general elections and no criticism of the government is permitted, small democratic changes have been introduced recently. While all democratic structures were suspended in 1962 and a “state of emergency” still exists, there have been recent moves to reinstate a measure of democracy. The legal system is based on English common law, but for Muslims, Shari’a law supersedes civil law in some areas.

The population of Brunei is considered among the wealthiest in Asia, with an average annual income in excess of US$25,160. The kingdom’s immense wealth largely results from the income from its oil and natural gas fields. For Brunei citizens, education and health care is free. There is also no income tax, and housing subsidies are readily available. There is no poverty. Large numbers of Malays, the majority people group, are employed in government jobs, as well the oil industry. Malays are given preference when applying for government jobs. However, many are still found in traditional roles as fishermen and boatmen.

The Malays of Brunei value family and community life and many enjoy a traditional lifestyle. They are renowned for their generous and gracious hospitality. A strong commitment to Islam is very obvious in Brunei, but in common with Malays across Southeast Asia, they live in harmony with those of other faiths.

The pervasive concept of the “Malay Muslim Monarchy” seeks to integrate Islam, Malay language and culture, and the monarchy.

The Borneo Church Mission (later absorbed into SPG) was established in England in 1846, with the aim of sending Anglican missionaries to Borneo, the island where Brunei is located. The first missionaries arrived in 1848 at the invitation of James Brooke, and Brunei was absorbed into the Diocese of Labuan (a nearby island and British crown colony). Brunei is still part of an Anglican Communion Diocese within the Anglican Province of Southeast Asia.

The Roman Catholic Church has also been established in Brunei for over 100 years. However, all Catholic monks and nuns were expelled in 1991.

Three Australian missionaries, Hudson Southwell, Frank Davidson and Carey Tolley, established the Borneo Evangelical Mission in Sarawak in 1928 (a work that led to the birth of Sidang Injil Borneo, or SIB Church). Today, SIB churches are also found in Sabah and Peninsular Malaysia, but the SIB has no legal presence in Brunei.

A significant number of Christians in Brunei attend one of several Anglican churches in Brunei, while others are affiliated with a growing number of independent congregations. The majority of these independent congregations are not officially registered as “churches,” but have been creative in registering themselves with the authorities. Some Christians do meet secretly. It has happened that Christian meetings in homes have been raided by the religious police in an effort to close down such illegal activities. Thus, the religious atmosphere in Brunei is repressive. Evangelical Christians number 6.1 percent of the total population.

The Chinese population largely follows Chinese religions but approximately 15 percent are Christian. Among the various indigenous peoples, many have converted to Islam. Others, notably in jungle villages, are Christian.

The Malay population is Sunni Muslim. Brunei is an Islamic state and Islam is obligatory for all Malays. The Religious Affairs Department actively and strictly regulates the practices of Islam, as well as monitoring the activities of other religions.

Christian witness and work by foreigners is not permitted and while Christians may convert to Islam, Muslims are forbidden to convert to another religion. Although religious tolerance is enshrined in the constitution, Christian activities are carefully controlled. Witnessing to Muslims is illegal. There are only a handful of Malay believers in Brunei and they face severe persecution if found out.

The Education Department is at the forefront of actively and vigorously pursuing the complete Islamization of Brunei by insisting that Islam be taught to all pupils at every level. This is something the traditional “mission” or church schools have tried to resist. 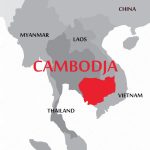